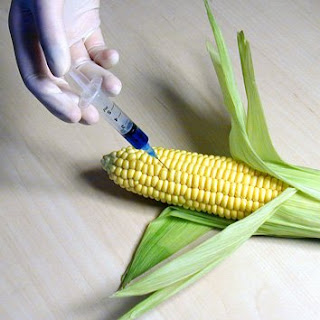 Robert T. Fraley is the Chief Technology Officer of Monsanto, a giant pesticide and biotech company. Among other things, Mr. Fraley received the National Medal of Technology from President Bill Clinton in 1999. On October 4, 2016, The Wall Street Journal ran an article by Mr. Fraley that proclaimed "GMOs Are a Necessity - For Farmers and the Environment."

Any argument based on the supposed "necessity" of a favored political proposition is always an argument without a genuine foundation. Whether or not we should allow massive corporations to reengineer living things (supposedly for our benefit) is a political question of huge significance, and it is a proposition that should be vigorously debated. There are definitely arguments on both sides, but there is no "necessary" right answer.

In the human and "political" world that we bring into existence by the choices we make, and by the actions we take, we are free to make any choice, and to take any action, we want. "Necessity" is a category that applies in the realm of science, where the laws that govern the physical behavior of the universe do, indeed, establish "necessary" relationships between actions and consequences.

Anywhere on Planet Earth, throw an object into the air and it will "necessarily" return to the ground at a specified rate, which we can absolutely calculate because the "law of gravity" applies. Human "laws" are of a different type; they are "prescriptive" not "descriptive." That means there is no "necessity" in the realm of human choice. Each human choice does imply a likely set of consequences (and sometimes those consequences might be so undesirable that we would naturally seek to avoid them), but we remain free to choose what we do, and no "necessity" binds us to make any particular choice.

I don't like GMOs, and I don't think that corporations should be free to reengineer the genetic composition of living things. I prefer a very much more precautionary approach. My purpose in this blog posting, however, is not actually to debate the benefits versus the dangers of GMOs. It is to dispute that any hypothesized "necessity" should drive our choice.

Any argument that is based on a claim that we must make a particular policy choice because it is "necessary" is actually an argument that seeks to avoid a genuine discussion of the issues involved.

In the case of GMOs, the stakes are way too high to fall for what amounts to a "debating trick." If something is truly "necessary" there is no ground for debate. There is here. GMOs may or may not be a good idea, either generally, or in particular cases, but "necessary" they are not.