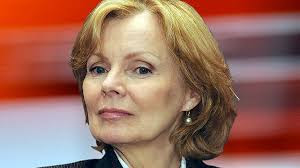 Pictured is Peggy Noonan, at one time a speech writer for Ronald Reagan and now a columnist for The Wall Street Journal. The picture above headed up an article on rr.com titled, "What’s this? Peggy Noonan making sense?"

That headline pretty much sums up my own idea about Noonan's general trustworthiness as an authority or guiding light on politics. She is not a reliable guide. Nonetheless, I read Noonan regularly.

Several years ago, I decided to subscribe to The Wall Street Journal precisely because I don't agree with the paper's politics and point of view. I figured that politics basically begins with a debate and discussion about what we ought to do to address the threats we face together, and to realize our collective opportunities. That's what a healthy politics requires, but you can't have a decent debate or discussion if you never listen to what the other side says.

In fact, the pervasive polarization of our politics probably does stem from, or at least has been accompanied by, our growing failure, as individuals, to listen to, or to grapple seriously with, the arguments of people with different views. Take Donald Trump (please). What self-respecting "liberal," or "progressive," or member of the Democratic Party would spend any time whatsoever listening to Trump's narcissistic perorations about "Mexican rapists," and how celebrities like himself can engineer sex with unwilling females?

Trump is pretty far "out there," so it's quite easy to justify ignoring anything he says. Those voters who are so strongly supporting Trump, however, are not, themselves, "deplorable" people, and they are making some good points, because they have some real points to make. Check out the recent New Yorker article by George Packer, for instance, "Head Of The Class: How Donald Trump Is Winning Over The White Working Class." It would be wise for liberals, progressives, and committed members of the Democratic Party to pay attention to Trump's supporters, and to start a discussion.

In effect, this is one of the main points made by Peggy Noonan, in her column in the October 29-30 edition of The Wall Street Journal. This recent column is titled, "The Great Disappointment of 2016." I recommend you click on the link, and read the article, but just in case the paper's paywall prevents your access, here are a few telling quotes:

What I’m thinking about this week is a focus group led by Peter Hart, the veteran Democratic pollster, Tuesday night, in Charlotte, N.C., still a toss-up state. Present were a dozen late-decider voters, three Democrats, six Republicans and three independents....

When asked to describe the America they want, they wrote things like “a solid education system,” “no longer at war,” “people have joy in their work,” “leading the world in everything, including morals,” “equal opportunity and reward based on work,” “people haven’t lost their homes” and “a culture that improves us as a people.”

Many of their hopes were communal, societal, not individual. A great instructive lesson for conservatives this year is that Margaret Thatcher’s individualist vision, expressed with the words “There’s no such thing as society,” has given way, or rather shifted weight. The individual is key and crucial, but everyone is worried about our society and culture now; they see the nation as a shared entity with shared problems....

Is America off track? They all nodded. A woman said you can’t pray in schools anymore. By this she seemed to mean that religious practice, which among other things offers guidelines and guardrails, is no longer officially sanctioned or encouraged. A man ruminated that things seemed to go off track after 9/11 and “never quite recovered.”

You are late-deciding voters, said Mr. Hart. Some of you have switched around, some are still undecided. Where are you now?

One was leaning toward Mr. Trump. Another was too, “because of Supreme Court decisions.” A woman said she thought she’d go Trump. “Discard the candidate, look at the platform.”

Another was pretty close to decided for Hillary: “I so much wanted Trump,” but “he doesn’t know when to shut up.” “I don’t love Clinton—I don’t trust her."

Another was still undecided: “I wanted to like Trump. . . . It’s embarrassing how he acts.”

One had come down for Hillary as the “lesser of two evils.”

Another said “I’ve always been Democratic,” and allowed that Mrs. Clinton has “leadership skills.” But there’s the email story: “She lies—makes you wonder.”

Another had broken for Hillary: “Trump’s ego is what kills me.” Of Mrs. Clinton, in contrast: “She knows what she’s doing.”

Watching the next day, online, I couldn’t stop thinking of what we all know. Oh, how the two big parties have let these good people down.

Continuing on from 11-9, the day after the election, and whichever way that election goes, we are not going to be able to rely on our major political parties (and I do mean either one of them) to bring the country back together, and to restore a healthy politics.

To cite to the advice of that Nobel Prize Winner I like so much, it is going to be up to us. To all of us together, and to each one of us, individually. That's right. We need to go ahead and internalize the message, and take responsibility, and make it our own. That's what we're supposed to do: