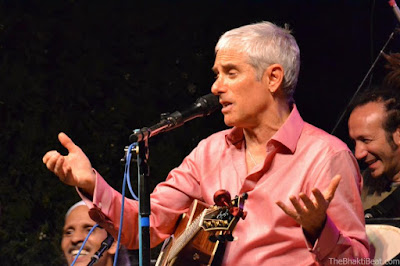 My son, Philips, has studied and trained as a Buddhist, and I have benefited greatly from being able to talk seriously with him about Buddhism. I have already mentioned how much I enjoyed a book he gave me for Father's Day, The Monk And The Philosopher: A Father And Son Discuss The Meaning of Life. As I said in my brief comment about that book, I ended up siding with the son!

On last Friday evening, I got another lesson from Philips, as he escorted me to a kirtan, held at the Pacific Cultural Center in Santa Cruz. Maybe everyone who will read this posting already knows about "kirtans," but I sure didn't. For a number of years, Philips has been attending kirtans, in Santa Cruz and elsewhere, and I think he may actually be part of what could be called the "kirtan community" here in Santa Cruz. I knew the name "kirtan," from talking with Philips, but I have not had the remotest idea of what a kirtan is actually all about. I gathered that it was some kind of musical event, but that's really all I knew. Here's what I found on the Internet:

Kirtan is a very different kind of music. Based on ancient chants, it has the ability to quiet the mind if listened to with intention. Everyone experiences kirtan differently, and it doesn’t have to be a religious experience. You can think of it as a sing-along. A kirtan concert is not your typical concert either. Everyone sits on the floor, although chairs are usually available. The performers are accessible, in fact there’s not much of a distinction between performers and audience. The wallah (leader) sings the mantra, and the audience sings it back. A single chant can go on for up to forty minutes. As you sing with each other you experience a deep connection with the musicians, the other audience members and yourself. And when the music stops, your mind is quiet.

Because kirtan has roots in India, many of the songs are sung in Sanskrit. Some I choose for the New World Kirtan podcast are also in Punjabi, the language of the Sikhs. If you’ve ever chanted responses in Latin or Hebrew in your religious tradition, then you know how powerful singing in an ancient, holy language can be. You can be completely immersed in the sound, with no words to distract the mind. The magic of the chants can then carry you within.

Kirtan is non-denominational, the Universal language of Spirit, the song of the Soul.

I was interested in seeing this in person, and participating, so I started asking Philips whether I could ever go to one of these kirtans with him. Frankly, my son seemed decidedly noncommittal about that idea; he didn't immediately spring forward with an invitation, and who could blame him? I doubt I would have wanted to take my Dad to a Bob Dylan concert. I didn't hold it against Philips that he seemed a bit reluctant about me tagging along to one of his kirtans.

About a week or so ago, though, Philips suddenly said he would get me a ticket to a kirtan featuring Jai Uttal, who is pictured above. Uttal is a powerful devotional, singer with a wonderful reputation, and you can check him out on You Tube, if you'd like. There are many samples of his work there, and I have put one sample at the bottom of this posting, for your convenience.

The kirtan I attended last Friday did, in a way, as the quotation above suggested might be the case, start off as a kind of "sing along" (albeit in Sanskrit or some similar language). It ended up as the musical equivalent of what the Quakers call a "gathered meeting," flooding me with a profound sense of the unity of humanity and the glory of our life.

Maybe everyone who will read this posting already knows about "kirtans," but just in case you don't, I recommend the experience!