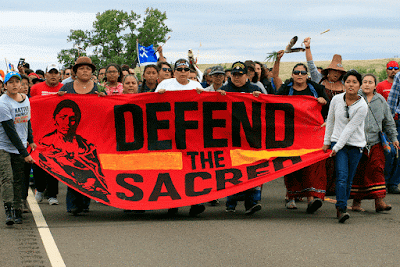 The WaterKeeper Alliance recently published an article titled, "Pipeline Protests: Many Tools, One United Goal." I was struck by the picture above, which appeared at the top of the article.

The picture shows a protest march against the Dakota Access Pipeline, and this march was being carried out not in the name of a political position, or in an effort to advance a particular policy objective. The march was not launched, as it might have been, as part of a campaign to stop global warming, which is caused most directly by the burning of fossil fuels, or even simply to stop the development of new pipelines, which is the "united goal" referenced by the WaterKeeper Alliance.

The march that is pictured, organized by the Standing Rock Sioux Tribe, announces itself as an effort to "Defend The Sacred." This is surely a more fundamental objective than advancing or opposing any specific project, or advancing or opposing any specific policy objective. Though I have great appreciation for those working to stop new pipelines, and to combat global warming, I would not want us to miss the message conveyed by the picture, and to forget the cause that motivated the march.

According to the dictionary, to "Defend The Sacred" is to seek to protect what is "holy," what is "entitled to veneration." I suggest to you that no political position, or proposed policy, however excellent, or however much merited, is ever, in itself, either "holy" or "entitled to veneration." Our human works, and that includes our politics, and the policies we promulgate, are part of a "human world" in which our human dominion is supreme. That "human world," because it is the product of human action, is not the realm in which true "holiness" can be found. "Holiness," today, can be most easily found in the World of Nature, which gives us life, and which we did not create.

Native tribes, wherever they survive around this globe, know this lesson, and are urging the more "developed" branches of the human family to learn it, too. The Earth is holy, and we are wholly dependent on it. When we "Defend The Sacred," we defend what is the "ground of our being," a religious phrase that is a perfectly accurate way to talk about our relationship to the World of Nature.

We are called, all of us, and upon the peril of our own lives, to defend the Natural World, to "Defend The Sacred," and to abstain from actions that suggest that we can treat Nature as if it were a human creation.

That is what the Standing Rock Sioux Tribe is telling us.

Let us not ignore their advice.