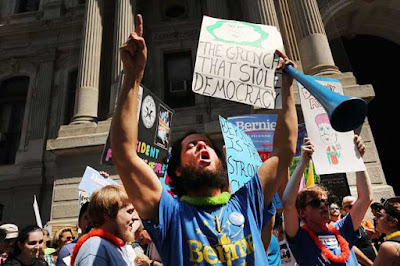 As the nation gets ready for the November 8th election, City Journal, which is pretty reliably "conservative" in its approach to public policy, has done a reprise analysis of the Democratic National Convention, held in Philadelphia last July. The City Journal article, by Michael Totten, is titled, "Children of the Revolution, The Rise of the Alt-Left." I think it's worth reading.

The tone of Totten's article is rather dismissive of those who supported Bernie Sanders in the Democratic Party primary (as I did), but there is a lot of excellent description and analysis to go along with the snark, and with the lightly-buttered contempt for Sanders that is the mainstay of what Totten has to say.

In essence, Totten is correctly noting the state of the nation today, and it is my belief that the political conditions he documents will persist immediately after November 8th. If our country is going to be "stronger together" in the post-election period, as Hillary Clinton is saying it must be, then it will be up to all of us to find ways to accomplish a restoration of faith in a political system that looks pretty rotten from whatever perspective it is viewed (Alt-Left or Alt-Right). Those who want to preserve a "Center" that will hold cannot dismiss the huge numbers of people on the flanks (from Sanders' supporters to those supporting Trump). That is what I gather from the Totten analysis, and that is why I think ignoring the snark, and reading it through, is worth the time.

To make the center "hold," post-election, and thus to avoid the anarchy that Yeats foretold, we are going to have to make fundamental changes! That is, of course, what Bernie Sanders' campaign was all about. He was calling for a "political revolution." To my mind, the Totten article demonstrates that this is, in fact, an absolute necessity.

Totten himself, while giving a pretty good description of our political situation, doesn't seem to get the main point, which is this: the status quo is unsustainable politically. We do need fundamental political change. Avoiding the horror of a Trump victory isn't remotely going to address this fundamental political problem. Totten paints young Sanders' supporters, at one point in his article, as anti-democracy. Yet, that is the exact opposite of what the Sanders' delegates were calling for in Philadelphia. Check out the picture at the top of this posting!

I have written extensively in this blog about the Convention, in postings #206 through #211. Please feel free to revisit my reporting, and I would recommend my posting #208, in particular, as a way to explain the following phenomenon, as documented (and denounced) by Totten:

As I took my seat on the first day, a color guard with the Veterans of Foreign Wars brought American flags onto the stage for the national anthem. Young Bobby Hill belted out a pitch-perfect “Star-Spangled Banner,” and midway through, many in the audience sang along. It was a genuinely moving moment, and it was completely unscripted.

The flags were taken offstage and the script got going in earnest, but some people refused to stick to it. A chorus of boos erupted from the floor at the mention of Hillary Clinton’s name. My note-taking hand froze. Did I actually hear that correctly? Was the DNC booing its own nominee? I wasn’t imagining things. Every time a speaker on the stage said Clinton’s name, the delegate floor belted out a chorus of boos. They also booed her running mate, Tim Kaine.

Totten accurately described the events on that first day of the Convention. Why did that booing occur? Because (read the section of my report #208 on "How Not To Run A Convention") every speaker on the podium who mentioned Hillary Clinton's name did so coupled with a phrase that stated that she was "the nominee." Totten did "hear it correctly." But it wasn't Hillary Clinton who was being booed, as a person; it was the claim that she was "the nominee," before the election was actually held, and thus before she deserved that title.

An "election" that is foreordained is no "election" at all, and "democracy" means that we proclaim the winner only after we count the votes.

Totten, and the Democratic Party establishment, didn't seem to get that. Sanders' supporters certainly did, and their booing was pro-democracy, not anti-democracy.

We all had better learn from the experience at the Convention. Neither flank is going to accept the arrogant claim that the wealthy and the powerful have the "right" to run our country (into the ground, as Trump might say), and particularly without earning that right through a fair election.

Get ready for November 9th; that's when we need to start working, in earnest, on "our revolution!" Trying to pretend that things can go back to what used to be "normal" is a prescription for political disaster, and "mere anarchy" will, indeed, be "loosed upon the world," in a "blood-dimmed tide." Consider, for instance, that "no fly" policy for Syria that Hillary Clinton advocates, and a war with Russia!

The "best" of us must, as I hope we all know, summon up our "conviction," and work to transform our current political reality, and to realize a genuine democratic revolution in this country, because "the worst" are definitely "full of passionate intensity."