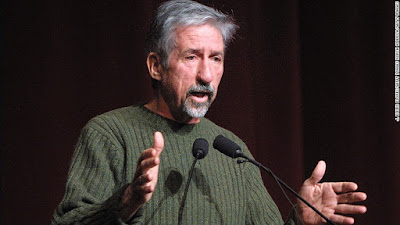 Tom Hayden died on Sunday, October 23rd. In the obituary published in the Tuesday, October 25th edition of the San Francisco Chronicle, Tom was quoted as offering the following advice:

Mr. Hayden maintained that a citizen was obliged not only to vote, but also to disagree with those he had voted for. "Dissent has been crucial to positive social change throughout our history,” Mr. Hayden said. “The American Revolution, abolition, women’s suffrage, the labor movement, the environmental movement. Where would we be as a country without that kind of dissent?”


I think Tom is dispensing some very good advice here, with his observation that we may well need to disagree with those politicians for whom we have voted. In that spirit, and having already voted for Hillary Clinton, let me suggest that there is some wisdom to be gleaned from a commentary published in the October 22, 2016 edition of The New York Times, and republished in my hometown newspaper, the Santa Cruz Sentinel, on October 25th, the date I read that Hayden obituary in the Chronicle.

The commentary I am citing, titled "The Dangers of Hillary Clinton," was written by Ross Douthat, a columnist whom Wikipedia properly characterizes as a "conservative voice."

Below, I am providing a lengthy excerpt from Douthat's commentary, providing a warning that I believe is consistent with what Tom Hayden has said about disagreeing with those candidates for whom we have voted.

In the Democratic Primary Election, Hayden did support Clinton over Bernie Sanders, to the distress of people like me, who were hoping that Sanders would be the candidate to go up against Mr. Trump. I think it's important, after Hillary Clinton is elected, as it seems ever more likely that she will be, not to lose sight of Hayden's warning. We may well need to disagree with Clinton as President, and to oppose her policies, particularly on the issues of war and peace.

Here is Douthat (with my running commentary inserted):

A VOTE for Hillary Clinton over Donald Trump, the Clinton campaign has suggested ... isn’t just a vote for a Democrat over a Republican: It’s a vote for safety over risk, steady competence over boastful recklessness, psychological stability in the White House over ungovernable passions. [There is no doubt that this comparison is totally fair! This is definitely why I voted for Hillary Clinton.]

This theme has been a winning one for Hillary, in her debates and in the wider campaign, and for good reason. The perils of a Trump presidency are as distinctive as the candidate himself, and a vote for Trump makes a long list of worst cases — the Western alliance system’s unraveling, a cycle of domestic radicalization, an accidental economic meltdown, a civilian-military crisis — more likely than with any normal administration.

Indeed, Trump and his supporters almost admit as much. “We’ve tried sane, now let’s try crazy,” is basically his campaign’s working motto. The promise to be a bull in a china shop is part of his demagogue’s appeal. Some of his more eloquent supporters have analogized a vote for Trump to storming the cockpit of a hijacked plane, with the likelihood of a plane crash entirely factored in.

But passing on the plane-crash candidate doesn’t mean ignoring the dangers of his rival.

The dangers of a Hillary Clinton presidency are more familiar than Trump’s authoritarian unknowns, because we live with them in our politics already. They’re the dangers of elite groupthink, of Beltway power worship, of a cult of presidential action in the service of dubious ideals. They’re the dangers of a recklessness and radicalism that doesn’t recognize itself as either, because it’s convinced that if an idea is mainstream and commonplace among the great and good then it cannot possibly be folly. [This is the paragraph that I suggest gets at a real truth about our current politics, and that may well mean that "non-conservative" voices will have to be raised, and loudly, after Clinton's election.]

Almost every crisis that has come upon the West in the last 15 years has its roots in this establishmentarian type of folly. The Iraq War, which liberals prefer to remember as a conflict conjured by a neoconservative cabal, was actually the work of a bipartisan interventionist consensus, pushed hard by George W. Bush but embraced as well by a large slice of center-left opinion that included Tony Blair and more than half of Senate Democrats.

One can look at Trump himself and see too much danger of still-deeper disaster, too much temperamental risk and moral turpitude, to be an acceptable alternative to this blunder-ridden status quo ... while also looking at Hillary Clinton and seeing a woman whose record embodies the tendencies that gave rise to Trumpism in the first place...

She was for the Iraq War when everyone was for it, against the surge when everyone had given up on Iraq, and then an unchastened liberal hawk again in Libya just a few short years later.

She was a Russia dove when the media mocked Mitt Romney for being a Russia hawk; now she’s a Russia hawk along with everyone else in Washington in a moment that might require deescalation.

She cites Merkel as a model leader, she’s surrounded by a bipartisan foreign policy cadre that’s eager for a Details To Be Determined escalation in Syria, and she seems — like her Goldman Sachs audiences — intent on sailing serenely above the storm of nationalism rather than reconsidering any of the assumptions of her class...

But in those cases where the cosmopolitan position isn’t necessarily reasonable or safe, in those instances where the Western elite can go half-mad without realizing it, Hillary Clinton shows every sign of being just as ready to march into folly as her peers.


I supported Bernie Sanders in the Democratic Primary because I am quite concerned about the failure of our national government to do anything about a financial arrangement that pipes almost all the benefits of our economic successes to those extremely wealthy "billionaires" at the top of the pyramid, and that continues to pursue military adventurism around the globe.

Choosing Hillary Clinton over Donald Trump in our current election is the right choice. However, let's not forget Tom Hayden's good advice:

A citizen [is] obliged not only to vote, but also to disagree with those [whom] he [or she has] voted for. Dissent has been crucial to positive social change.