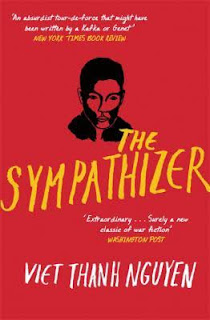 I finished this book in London on August 26th. It's a powerful book. I am still thinking about it.

"What is more precious than independence and freedom?" That's a question in the book. That is the question that the Sympathizer has to answer, on pain of death.

"Nothing is more precious than independence and freedom." That's a statement that Viet Thanh Nguyen says is "almost the same [as the question] but not quite."

And when the story is done (the story ends on Page 382) read on:

Some may see our family of refugees as living proof of the American dream - my parents are prosperous, my brother is a doctor who leads a White House advisory committee, and I am a professor and novelist. But our family story is a story of loss and death, for we are here only because the United States fought a war that killed three million of our countrymen (not counting over two million others who died in neighboring Laos and Cambodia). Filipinos are here largely because of the Philippine-American War, which killed more than 200,000. Many Koreans are here because of a chain of events set off by a war that killed over two million.

We can argue about the causes for these wars and the apportioning of  blame, but the fact is that war begins, and ends, over here, with the support of citizens for the war machine ... Telling these kinds of stories, or learning to read, see and hear family stories as war stories, is an important way to treat the disorder of our military-industrial complex. For rather than being disturbed by the idea that war is hell, this complex thrives on it.