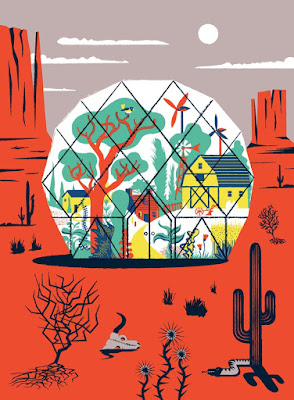 The October 3, 2016 edition of The New Yorker has an article by Akash Kapur that is titled, "The Return Of The Utopians." I commend it to your attention. Just click the link.

Kapur is not, really, a big supporter of utopian thinking, stating that "contradiction and hypocrisy have always hovered over the utopian project." Kapur aligns himself with French philosopher and political economist Bertrand de Jouvenel, whom he quotes as follows:

There is a tyranny in the womb of every utopia.

That is probably true, but I personally believe that contradiction and hypocrisy are inherent possibilities in just about everything that human beings do. I'd make de Jouvenel's statement a bit more general: "There is the possibility of a tyranny in the womb of every human project."

Just consider, for example, our current presidential campaign. This year's presidential contest is certainly a non-utopian project, but one with some very dangerous indications that a tyranny may be hatching inside of what purports to be a democratic election.

I have, on several occasions, published my own view of utopia in this Two Worlds blog, and my conclusion is different from Kapur's. It is our task, always, to brave the danger that hypocrisy, contradiction, tyranny, and similar afflictions may be associated with any of the actions we take, as we construct the human world in which we most immediately live. Such dangers are the inevitabilities of our human situation. In a world that makes such possibilities an almost routine result of human action and error (and what religious thinkers call "sin"), utopian thinking can be a remedy, not a cause. To restate my earlier observation:

I have always believed in "utopian" thinking; that is, I have believed in it since my undergraduate days, when I studied "Utopia" for two years, as a participant in an Honors Program in Social Thought and Institutions.

The Honors Program was headed by Charles Drekmeier, and it was a life-changing experience for me. The lesson I took away was that the world we inhabit is not, truly, a "given," and that our individual and collective actions can transform reality.

Seeking to transform our human-created reality into something worthy of our highest aspirations is what utopia means to me.

If Kapur is right, and if the "return of the utopians" is at hand, that may mean that my kind of utopian thinking is making a comeback.

That could be good news!