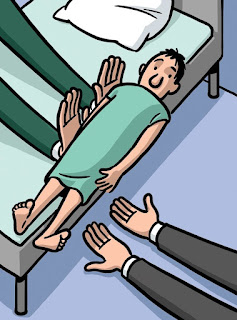 Speaking of The New Yorker (as I was in my posting yesterday), that September 5th issue had a lot of good articles, including one on our emerging health care crisis.

As James Surowiecki noted in the September 5th edition of "The Financial Page," our current health care system is being threatened by the decision of major insurance companies to withdraw from participation in the Obamacare exchanges.

I recommend the full article, but here is what I think is the essence of Surowiecki's message. He "defends," in one way of looking at it, the insurance companies that liberals like to blame for their greediness and rapacity:

Conservatives point to Obamacare’s marketplace woes as evidence that government should stop mucking around with health insurance. In fact, government hasn’t mucked around enough: if we want to make universal health insurance a reality, the government needs to do more, not less. That doesn’t require scrapping the current system: the Netherlands and Switzerland both demonstrate that you can get universal coverage through private insurers. But their examples also show that to do so we’d need to make it much harder to avoid buying insurance, and we’d need to expand subsidies to consumers.


Alternatively, we could implement the public option, which Obama himself called for in that 2009 speech: a federal program, modelled on Medicare, open to anyone on the individual market. The public option would guarantee that there was always at least one good choice available in the marketplace, and would provide competition for private insurers. If it used the government’s bargaining power to hold down costs and expand access, it could offer good benefits at a low enough price to attract younger, healthier patients.

There are solid arguments for both of these models. Either would work, if there were a shift in the political mood and it were given a shot. Even if nothing is done, Obamacare will continue to limp along, probably turning into something akin to Medicaid. But the departure of big insurers like Aetna has made it clear that, if we don’t do more to help cover people in the individual market, the program will never make good on its original promise of truly comprehensive reform. So don’t hate the players; fix the game.

Of the two solutions that Surowiecki suggests, I personally prefer the "public option," which simply means that we, acting collectively, decide that we will insure ourselves. Large organizations self-insure all the time, because it just makes economic sense. If we choose to do so, our nation can well afford to make sure that everyone has the kind of health care that only those who are on certain employer-financed plans, and those on Medicare, are blessed with now.