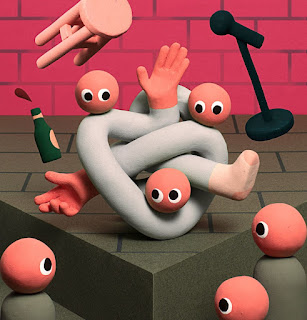 The September 5, 2016 issue of The New Yorker has an engaging article on the "Upright Citizens Brigade," which is a training center for those wanting to learn how to do improvisational comedy. The article was written by Emma Allen, who actually took the course. It is titled, "How The Upright Citizens Brigade Improvised A Comedy Empire," and is subtitled, "The art of making it up as you go along." It's a fun (and informative) article, which I definitely recommend.

Life, in general, is largely about "making it up as you go along," and Allen's article thus provides some good advice that can benefit all of us, even if we're not trying to make it big in comedy.

According to the Upright Citizens Brigade, the key to "making it up as you go along" is always to say, "Yes AND," as opposed to "Yes, BUT." Only in that way can you make something worthwhile out of what may seem to be an unpromising beginning.

As I say, I think that's good advice in general!