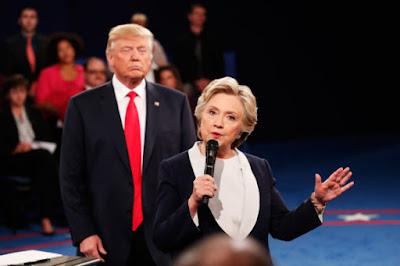 The second of this year's presidential debates, which was held on Sunday, October 9th, was properly called "nasty." Here's a place you can watch the entire thing, if you missed it in real time. Here's a link to the debate transcript, if you'd like to read through the various (nasty) exchanges and nail down the details.

I want to point out what I thought was an important question posed to the two candidates. It was the last question, and it came from one of the citizen participants, a Mr. Becker. His question was the opposite of "nasty," because it called for a non-nasty response. Here it is:

RADDATZ: We’ve sneaked in one more question, and it comes from Karl Becker.

QUESTION: Good evening. My question to both of you is, regardless of the current rhetoric, would either of you name one positive thing that you respect in one another?

I think that this is an important question, because it goes to the essence of what our democratic politics is supposed to be all about. We have differences, and very profound differences, and yet we are "one nation." We think so, at least. We hope so. As the Pledge of Allegiance says, citing to the "original" version of the Pledge, before "God" got imported into it, we are "one nation, indivisible, with liberty and justice for all."

This text is not about the "facts," that's for sure. The statement about "liberty and justice for all" is clearly aspirational, not descriptive. However, Americans have believed that we are "one nation," and that we are "indivisible."

Frankly, these two points of traditional agreement about our nation (post Civil War) are being called into question during this election. IF we are to survive this election as "one nation, indivisible," we must have "respect" for those with whom we have contended on the electoral and policy battlefield.

Yes, for Hillary supporters, of whom I am now one, that even includes having respect for those voters who support Donald Trump, however much a person might disagree with Donald Trump and think of Mr. Trump as having "deplorable" personal characteristics and/or a "deplorable" set of policy positions.

Mr. Becker's question invited the candidates to say something that could let their own supporters know that however divisive the contest might be now, amidst the "current rhetoric," we are still "one nation," trying to make up its mind about difficult questions, and still committed, together, to achieving "liberty and justice for all."

Mr. Becker's question asked for a statement naming "one positive thing" that the candidates respect "in one another."

Hillary Clinton said, "Look, I respect his children. His children are incredibly able and devoted, and I think that says a lot about Donald."

Donald Trump, actually answering the question posed, said, "I will say this about Hillary. She doesn’t quit. She doesn’t give up. I respect that. I tell it like it is. She’s a fighter."

In other words, Donald Trump did note (and quite accurately) one of the greatest strengths of Hillary Clinton, and thus let his supporters know that his opponent was worthy of respect. Hillary Clinton didn't have such a response. She could not say one thing about what she respected in her opponent, or in his campaign, and I think that bodes very ill for all of us.

I think Donald Trump's behavior, statements, and policy positions are, for the most part, "deplorable." I am definitely planning to vote for Hillary Clinton in the upcoming election. However, those who support Donald Trump are not all "deplorables," as Clinton once said. We all need to understand that we are "one nation," and that that this needs to be the firm ground on which we battle about how to provide "liberty and justice for all."

I respect the fact that Donald Trump has galvanized huge numbers of voters to care about this election, and to demand some kind of change that will make our government responsive to the ordinary people of this nation. I wish Hillary had said that, indicating that she will respect the concerns of those who now are supporting her opponent.

I supported Bernie Sanders in the primary because it was clear to me that he was demanding real change of a kind that I believe is the right way to turn this country around. A demand for real change is a demand we should all respect.

Let us respect our common project. All of us. There is a lot to do to achieve "liberty and justice for all," and we won't be successful if we can't work together, after the "current rhetoric" has been resolved in the election in November.

The problems and challenges we face as a nation are real, and a divided nation, leading to a divided government that can't act, will never solve them.*

*PS: The Nation has an article that explores this very topic.