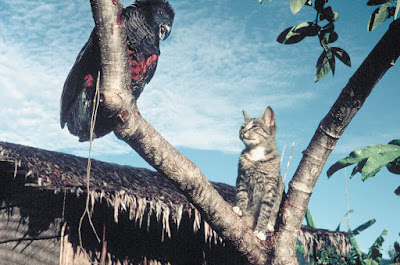 The September 29th edition of The New York Review of Books contained a review of Cat Wars: The Devastating Consequences of a Cuddly Killer

. According to the headline, "The Killer Cats Are Winning!" The book is by Peter P. Marra and Chris Santella, and was published this year by Princeton University Press.

If you'd like another look at this topic, you might also consider the following article, by Travis Longcore, Catherine Rich, and Lauren M. Sullivan: "Critical Assessment of Claims Regarding Management of Feral Cats by Trap–Neuter–Return." The Longcore-Rich-Sullivan article was published in 2009 in Conservation Biology.

The upshot of both the book and the article is that domestic cats are devastating predators, destroying bird populations:

The jaunty image of the house cat as a kind of lap-sized leopard and the powerful, almost parental love that cat owners feel for the increasingly popular pet obscure another, darker truth about Felis catus. Free-roaming domestic cats ... are an environmental menace of staggering and still-escalating proportions. They ... butcher tens of billions of songbirds, small mammals, reptiles, and lizards each year and push vulnerable species toward extinction. Cats hunt when they are hungry and hunt when they are full. "In the United States,” the authors write, “more birds and mammals die at the mouths of cats than from wind turbines, automobile strikes, pesticides and poisons, collisions with skyscrapers and windows, and other so-called direct anthropogenic causes combined.”

Until I read the article from Conservation Biology, which I did a number of years ago, I had never really thought much about this subject. Now that I have, I believe that our transformation of Felis catus into a domestic pet is a good example of how human beings make a mistake by thinking that they can ignore the World of Nature, as we create our own, human reality.

The fact that domesticated cats are "an environmental menace of staggering proportions" ought to factor into our decision-making process. Maybe we ought to think twice before inviting these "pets" into our homes.