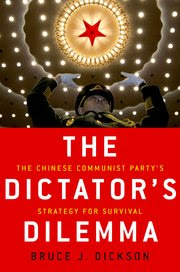 The Wall Street Journal published a review of a new book by Bruce J. Dickson, The Dictator's Dilemma. Reporting on the review, and not the book itself, I can inform you that the point of Dickson's book is to argue against the thesis that "the Chinese people are fed up with the Party, impatient for reform, and ready for democracy."

The party’s strategy, according to Dixon, is “a mix of repression, legitimation, and co-optation.”

The review of Dickson's book, by Benjamin L. Read, who is a professor at the University of California, Santa Cruz, observes that "the repression has various flavors, which [Dickson] catalogs in some detail, from arrests of activists and lawyers to filtering the internet. All of this has gotten worse since President Xi Jinping took the reins in 2012–13."

However, to continue quoting Read's review:


If repression were the primary experience of the Chinese people, the regime wouldn’t enjoy popular support. Mr. Dickson highlights what the party has done to win the hearts and minds of the people: raising incomes (not merely growth rates) by promoting economic development; implementing modest political reforms at the local level; providing increased access to education, health care and other public goods; appealing to national pride; and bringing into the party’s ranks many members of the wealthy and the well-educated classes.

It seems to have worked. The book’s primary evidence for this claim comes from two surveys designed by Mr. Dickson and implemented by Peking University’s well-respected public-opinion center. In the 2010 version, researchers conducted face-to-face interviews with 3,874 randomly selected people in 50 cities around the country; the 2014 version reached 4,128 respondents. Both of these surveys found widespread support for and trust in the regime’s core institutions. Trust in the central party and government averaged between 7.5 and 8 on a 0-10 scale, for example. The book also reports respondents’ assessments of specific areas of public policy. The majority of those surveyed—75%—said that they were satisfied with their local government’s efforts on education and social order. (Only half said the same about food safety, a topic of intense concern.) ...

Most Chinese believe that their country already has a high level of democracy, are satisfied with the quality of current democracy, and are optimistic about further increases in democracy in the near future.”

Real democracy requires individuals to renounce comfort for freedom, and to engage, themselves, in the arduous and perilous tasks of self-government. This is the message, in the end, of Dostoevsky's Grand Inquisitor, even though that wonderful disquisition, from The Brothers Karamazov, talks of the oppressions of clerical, not political, power:

No science will ever give them bread so long as they remain free, so long as they refuse to lay that freedom at our feet, and say: "Enslave, but feed us!" That day must come when men will understand that freedom and daily bread enough to satisfy all are unthinkable and can never be had together, as men will never be able to fairly divide the two among themselves. And they will also learn that they can never be free, for they are weak, vicious, miserable nonentities born wicked and rebellious. Thou has promised to them the bread of life, the bread of heaven; but I ask Thee again, can that bread ever equal in the sight of the weak and the vicious, the ever ungrateful human race, their daily bread on earth? And even supposing that thousands and tens of thousands follow Thee in the name of, and for the sake of, Thy heavenly bread, what will become of the millions and hundreds of millions of human beings to weak to scorn the earthly for the sake of Thy heavenly bread? Or is it but those tens of thousands chosen among the great and the mighty, that are so dear to Thee, while the remaining millions, innumerable as the grains of sand in the seas, the weak and the loving, have to be used as material for the former? No, no! In our sight and for our purpose the weak and the lowly are the more dear to us. True, they are vicious and rebellious, but we will force them into obedience, and it is they who will admire us the most. They will regard us as gods, and feel grateful to those who have consented to lead the masses and bear their burden of freedom by ruling over them—so terrible will that freedom at last appear to men! Then we will tell them that it is in obedience to Thy will and in Thy name that we rule over them. We will deceive them once more and lie to them once again—for never, never more will we allow Thee to come among us. In this deception we will find our suffering, for we must needs lie eternally, and never cease to lie!

There is, I think, some relevance to our contemporary American politics in Dickson's report on China, and on the people's acceptance of the repressive realities imposed by the Chinese Communist Party.

Much relevance, too, in Dostoevsky's heart-wrenching and timeless challenge to us all.