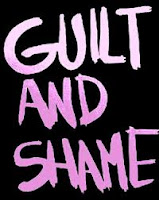 I read The New York Times each morning, and I recently discovered a couple of copies that I had set aside. I think I must have done that because I had read something that I wanted to think about.

For instance, David Brooks wrote about "The Shame Culture" in his column published on March 15, 2016. I wanted to think about that.

Brooks pretty much deplores this new reality, and he ends up coming down hard for what might be called "traditional morality," which I think means that Brooks is opting for the desirability of a "guilt culture."


If we’re going to avoid a constant state of anxiety, people’s identities have to be based on standards of justice and virtue that are deeper and more permanent than the shifting fancy of the crowd. In an era of omnipresent social media, it’s probably doubly important to discover and name your own personal True North, vision of an ultimate good, which is worth defending even at the cost of unpopularity and exclusion.

The guilt culture could be harsh, but at least you could hate the sin and still love the sinner. The modern shame culture allegedly values inclusion and tolerance, but it can be strangely unmerciful to those who disagree and to those who don’t fit in.

I, personally, don't think that either guilt or shame should be the basis of our "culture." How about acceptance and forgiveness (for both ourselves and for others)?

I could go for a culture based on that!