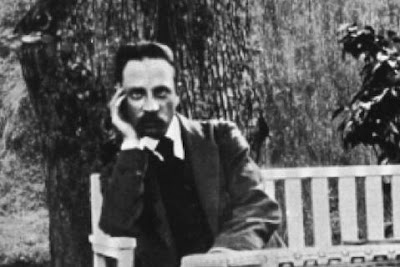 O bliss of tiny creatures
which remain always in the womb which carries them;
o happiness of the gnat, which still hops within,
even on its wedding: for womb is all.
See the half assurance of a bird,
which almost knows both through its origin,
as if it were one of those Etruscan souls
received by space out of a corpse
whose silent figure is its lid.
And how dismayed is one which must fly
out of its native womb. As if it is
afraid of itself, it zigzags through the air, like a crack
running through a cup. So the track
of a bat rends through the porcelain evening.


David Gelernter, professor of computer science at Yale University, wrote about artificial intelligence in an article that appeared in the March 19-20, 2016 edition of The Wall Street Journal. In that article, titled, "Machines That Will Think and Feel," Gelernter wonders how it was that Rilke came up with his comparison of "the flight of a small bird across the evening sky to a crack in a smooth porcelain cup." Maybe, Gelernter says, the poet made this comparison because "these very different things made him feel the same way."

Gelernter's point is that human "intelligence," as it actually operates within real human beings, and within our human society, is something more than the ability to do rational calculations. There is, inevitably, an "emotional" or "feeling" component to our intelligence that makes it human. Since our efforts to advance artificial intelligence tend to overlook this fact, we are on the threshold of a world that could be a big problem for human beings.

What, asks Gelernter, would it mean if a machine had an IQ of 5,000? We might be able to create such a machine, and pretty soon, too, and if we put such a machine in charge of many aspects of our lives, what would be the result?

The machine might not "feel our pain." It might not empathize or sympathize with our situation the way a human being might. And if the machine were making the arrangements for us in the world we inhabit, its ability to do prodigious calculations would not, likely, make it sensitive to what we really care about.

Human beings do not make themselves. We are biological beings, born of the World of Nature, and as much as we study and learn about the mechanisms that help us function, "who" we are remains a mystery.

If we attempt to go beyond the "intelligence" that the World of Nature has provided us, and to substitute for that intelligence an intelligence that we ourselves design and build (those machines with the IQs of 5,000 that can run our lives better than we can), we will put the continuation of our truly "human" life in peril.

We humans, in other words, are creatures, as well as creators, and we are dependent on a world that we did not create, a world in which our existence and presence is always a mystery. If we ignore or deny this truth about who we are, as humans, an inhuman future will be forthcoming.