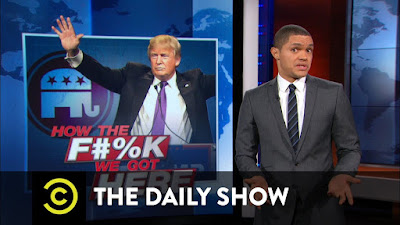 How did we get here?

According to Brett Stephens, writing in The Wall Street Journal, "The GOP Gets What It Deserves." Frankly, my comment is, "don't I wish!"

Stephens was writing before Donald Trump had definitively secured the Republican Party nomination, and before the polling that now shows him running almost neck and neck with Hillary Clinton. I think Stephens still had hope, back in May, that someone else would ultimately carry the banner for the Republicans.

Stephens opined that if the Republican Party nominated Trump this fact would "all but guarantee another Clinton presidency." Stephens did not seem thrilled at that prospect, and he was not, it appears, a very good prognosticator, at least not if you give recent polls much credence. Both parties seem to be campaigning not on the basis that their candidate is particularly good, but on the theme that the other party's candidate is horrible, and the polls say that both sides have a shot: 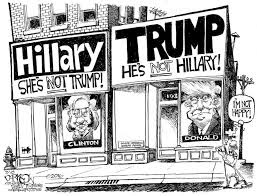 I put the Stephens' piece in my newsprint pile, way back when, for just one reason. I think the following statement, from his column, is pretty much on the mark:

The point of democracy isn't freedom. It's political accountability.

If we don't hold our elected officials (and political candidates) accountable for what they say, and for what they do, we will all get what we deserve, and the two leading presidential candidates are NOT equal by that test. A news analysis by Jonathan Martin, appearing in the September 18, 2016 edition of The New York Times, was published under this headline: "Anything-Goes Campaign an Alarming Precedent." Here's the gist of Martin's argument:

Routine falsehoods, unfounded claims and inflammatory language have long been staples of Mr. Trump’s anything-goes campaign. But as the polls tighten and November nears, his behavior, and the implications for the country should he become president, are alarming ....


Stephens may have been a bit off on his predictions, but Martin got that last part right!