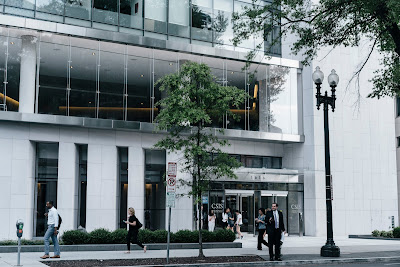 The photo, above, shows the offices of the Center for Strategic & International Studies, a think tank located in Washington, D.C. The picture illustrates an article published in the August 7, 2016 edition of The New York Times, found online under the title, "How Think Tanks Amplify Corporate America's Influence." The Times also carried a follow-up article on August 8th.

The original Times article was reprinted by the San Francisco Chronicle on August 8th. On August 9th, the very next day, a Chronicle columnist, Debra J. Saunders, who is generally known for her "conservative" or "right wing" perspectives, wrote a column titled, "Warning: dangerous think tanks ahead." Saunders put a "left" versus "right" political spin on the original story, because she sees a "danger" in left wing attacks on the studies produced by these corporate-sponsored (though purportedly independent) think tanks. Saunders thinks that it would be terribly unfair to make these tax-exempt think tanks disclose who paid for their studies, and that such a demand for disclosure is nothing more than an unfair attempt to discredit their bought and paid for conclusions.

If you can penetrate the Chronicle's paywall, to read her column, you will find Saunders touting the observations of Cleta Mitchell, described by Wikipedia as "an American lawyer, politician, and conservative activist." Mitchell thinks that left wingers are attempting to "bully dissent." Saunders also promotes the ideas of Kimberley Strassel, a conservative columnist for The Wall Street Journal. Strassel has written a book along these same lines: The Intimidation Game: How the Left is Silencing Free Speech.

As I read the original article in The New York Times, the operations of various "think tanks," whether "conservative" or "progressive" in their basic orientation, tend to dance to the drum of those with the big bucks. That is the point of the article, and the message is not surprising. The corporate oligarchy that is running our country is using its financial resources to provide the intellectual props that will help it maintain good appearances. Really, what's wrong with making that clear?

"Think tanks" purport to  be independent of any political bias (and for that independence they get a tax-exempt status). If the think tanks are not, in fact, independent at all, and if the "truths" and the "facts" they publish are bought and paid for, then it becomes incredibly difficult for ordinary persons to discern the realities of the topic being discussed.

Saunders has clearly bought into the Citizens United concept that money equals free speech. Proving that money has distorted the conclusions of supposedly independent reports, and demanding that those distortions be made clear, is seen by Saunders as an attack on free speech itself.

You know, I don't think she's right about that!