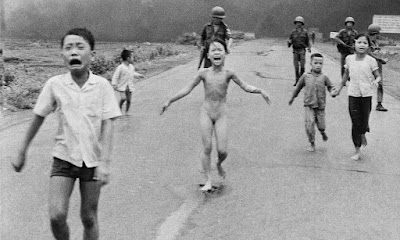 According to an article in The Guardian, Facebook has refused to allow the above photo to appear on its social media site. I'll be interested to see if this edition of my Two Worlds blog is censored by Facebook, since my blog postings, which appear originally on a personal website, are automatically republished to Facebook by Networked Blogs.**

The Guardian article says that Facebook's policy is that "any photographs of people displaying fully nude genitalia or buttocks, or fully nude female breast, will be removed.” I hope that this policy will not be used to prevent photographs like the famous photograph above from appearing on Facebook.

Miller v. California is a 1973 case that sets out what some commentators have called the "modern" test for obscenity: "After years in which no Supreme Court opinion could command majority support, five members of the Court in Miller set out a several-part test for judging obscenity statutes: (1) the proscribed material must depict or describe sexual conduct in a patently offensive way, (2) the conduct must be specifically described in the law, and (3) the work must, taken as a whole, lack serious value, and must appeal to a prurient interest in sex. What is patently offensive is to be determined by applying community values, but any jury decision in these cases is subject to independent constitutional review."

Miller, in other words, defines pornography or obscenity by reference to "community values." This is not, exactly, a very clear standard, and echoes, I think, though in a different formulation, a famous statement by Justice Stewart, in Jacobellis v. Ohio, which was decided in 1964. In that case, Justice Stewart is quoted as follows, this being perhaps the Court's best-known judicial statement about obscenity and pornography:

It is possible to read the Court's opinion in Roth v. United States and, Alberts v. California ... in a variety of ways. In saying this, I imply no criticism of the Court, which in those cases was faced with the task of trying to define what may be indefinable. I have reached the conclusion, which I think is confirmed at least by negative implication in the Court's decisions since Roth and Alberts, that under the First and Fourteenth Amendments criminal laws in this area are constitutionally limited to hard-core pornography. I shall not today attempt further to define the kinds of material I understand to be embraced within that shorthand description; and perhaps I could never succeed in intelligibly doing so. But I know it when I see it, and the motion picture involved in this case is not that.

In the end, in trying to define graphic depictions of obscenity or pornography, I do think that we "know it when we see it." By that standard, Nick Ut's Pulitzer prize-winning photograph, reproduced above, is not obscene or pornographic. To quote Justice Stewart, I know it when I see it, and the picture shown above is "not that."

The obscenity in the photo is not the "fully nude genitalia" of the little girl. There is no obscenity there. The obscenity involved in this photograph was in the use of napalm, by United States armed forces, against non-combattant men, women, and children. It is true, in the photograph, that the viewer's eye is drawn immediately to the agony and pain of Phan Thi Kim Phuc, the little girl in the center who has no clothes.

But what about that little boy? Look at his face! There you can see the obscenity of war made visible (no genitalia needed to make the point): 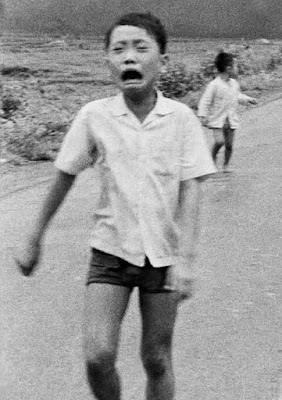 **Postscript:
Between the time I wrote this, yesterday, and the publication of this blog posting, today, Facebook has, reportedly, reversed its decision.