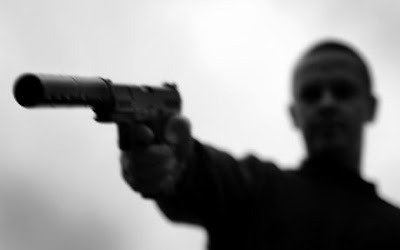 "Hired gun" is a term, I find, with a lot of different meanings. For instance, here's the definition provided by the "Free Dictionary," online:

1. One, especially a professional killer, who is hired to kill another person.
2. One hired to fight for or protect another.
3. One with special knowledge or expertise, as in business, law, or government, who is hired to resolve particularly difficult or complex problems.


The Macmillan Dictionary has a similar, but more concise, set of definitions:

1. someone who is paid to kill someone

2. an expert who is employed to solve a problem


The Urban Dictionary (also an online resource) has a completely different take on the "hired gun" definition:

Attractive young women hired to work at an establishment based solely on their sex appeal. Examples of hired guns are pretty girls that work as bartenders in upscale bars, clubs and lounges. Hired guns can also be strippers or sexy young ladies that work in mens clothing stores or waitresses in restaurants. Hired guns are good at getting men to spend absurd amounts of money by simply flirting with them. It can be particularly difficult to pick up a girl that is working as a hired gun because these chicks get hit on by men on a regular basis at their jobs. Also, many hired guns are just doing their job by flirting with men and are not trying to get picked up anyway. Many of these girls may be stuck up from constant sexual advances. Many businesses, like the restaurant Hooters, are based entirely upon the employment of hired guns. As the saying goes, "sex sells."

The "hired gun" phrase came to mind as I was thinking about the United States military, and about why it seems to be so difficult to stop the military adventurism that characterizes the current operations of the United States government.

When I was in college (and the nation was in the midst of the Vietnam War), ordinary citizens (males) were drafted, against their will, to go kill other people, allegedly to advance our national interest. Some complied. Some refused, and everyone felt they had the right to engage in a spirited debate about whether or not killing other people in Vietnam was really in our national interest. The "personal" and the "political" were connected. That's what fueled the debate (and ultimately ended United States military action in Vietnam).

With the creation of the "all volunteer Army," which has now been in existence for forty-one years, and especially with the increasing use of private contractors to carry out military assignments on behalf of the government, our military forces have truly become "hired guns."

President Nixon's brainstorm (it was his idea to create the "all volunteer Army") has disconnected the "personal" from the "political," and thus has eliminated, pretty much, the kind of superheated debate about United States military operations that took place during the 1960's and early 1970's.

I'm thinking that the whole idea of "hired guns," people who get paid to go out and kill people at the behest of the government, makes it all too easy for our elected representatives to embark on the wars in which we are now so entirely enmeshed. If we, the citizens of the United States, had to "do it ourselves," I believe that there would be a lot less killing going on.