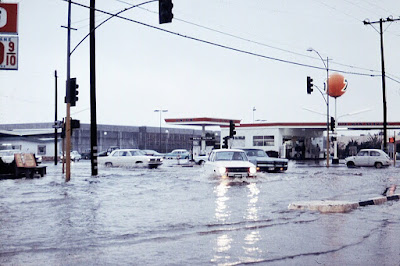 Here is a link to an April 26, 2016 story published online by KCET, a non-commercial and independent educational television station located in Los Angeles, California. The picture, which accompanied the story, shows flooding in the City of Garden Grove, located in northern Orange County, in 1971.

About a week before their April 26th story was published, the station had reported that a study of the melting of the West Antarctic Ice Sheet was expected to boost sea levels by about a meter by the end of this century, bringing the total increase in sea level rise from all sources to two meters, or about six and a half feet.

In the story linked here and above, KCET confessed to their viewers that they had been "far too optimistic," and that "recent, as-yet-unpublished data from Antarctica suggests that sea levels could rise three meters — almost ten feet — by the middle of the century."

Margaret Davidson was quoted in the KCET story. She is "NOAA’s senior advisor for coastal inundation and resilience science and services."

Davidson told attendees at the RIMS '16 Conference, held in San Diego, that "the latest field data out of West Antarctic is kind of an OMG thing,” since sea level rise could reach three meters by 2050 or 2060, a much steeper rise happening far sooner than even the most catastrophic scenarios currently available in peer-reviewed journals and the far more conservative estimates published by the Intergovernmental Panel on Climate Change. That steep a rise in sea level would put significant parts of many California cities underwater in just two or three decades.

Here's what it means:

The Bay Area will be almost completely changed. Hilly San Francisco will be spared the worst of the damage, though it will lose UCSF's fancy new campus in the southeast part of town at Mission Bay. Downtown San Rafael will be underwater. The Bay will reach to Petaluma, Napa, and Fairfield — three cities well inland of the current Bay shore. The flats in Richmond and North Richmond, now populated by some of the Bay Area's least-affluent communities, will be underwater. Point Richmond will become an island a mile offshore. Oakland will lose its port, its airport, and many square miles of its most affordable housing in West Oakland and near the Coliseum. Between Hayward and Union City, a broad arm of the Bay will reach nearly to the base of the hills. Along the Peninsula, essentially everything east of Route 101 will be gone. So will downtown Milpitas.

And the most spectacular damage will be east of the Bay, in the Delta ... We could expect open water from West Sacramento — which would be lost without public works intervention — to Tracy, 60 miles south. Downtown Stockton would be gone. So would many miles of Interstate 5, which would skirt the east shore of the Sacramento Sea.

Our human civilization is utterly dependent on the World of Nature, or the World That God made, as I sometimes call it. "God," if you are religious; "Nature" if you're not.

The main point is that we need to conform our activities to the laws that rule the Natural World.

And what happens when we don't?

Well, picture Garden Grove, shown above, with the water up to the roof of the gas station. Picture that in, say, about twenty-five or thirty years.