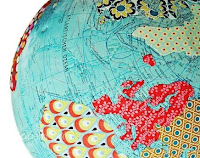 Here is a quick little follow up to the OMG posting I made here yesterday.

In its August 5th edition, Rolling Stone published an article titled, "The Point of No Return." In that article, the magazine quoted climate scientist James Hansen, describing the same phenomenon discussed yesterday.

Here is a brief excerpt from the article:


On July 20th, James Hansen, the former NASA climatologist who brought climate change to the public's attention in the summer of 1988, issued a bombshell: He and a team of climate scientists had identified a newly important feedback mechanism off the coast of Antarctica that suggests mean sea levels could rise 10 times faster than previously predicted: 10 feet by 2065. The authors included this chilling warning: If emissions aren't cut, "We conclude that multi-meter sea-level rise would become practically unavoidable. Social disruption and economic consequences of such large sea-level rise could be devastating. It is not difficult to imagine that conflicts arising from forced migrations and economic collapse might make the planet ungovernable, threatening the fabric of civilization."

As you will note, Hansen does not see environmental changes, per se, as the main danger we face. Floods will drown people. Droughts will have adverse impacts on agriculture, meaning people may starve. The loss of snowpack will mean the diminution or elimination of the water supplies that we take for granted, and assume will supply us with the water we need.

Once human populations become "ungovernable," and human arrangements and relationships we have taken for granted begin to "unravel," the fate of our civilization is at maximum risk. And since we do not live individual lives, but live together, unraveling the "fabric of civilization" is a threat that is not only collective, but individual.