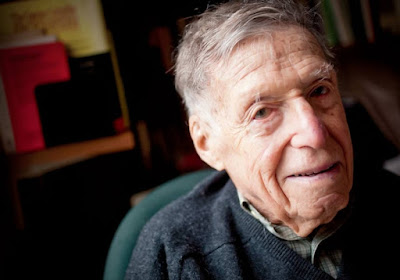 My title for this posting #235 is playfully obscure (or perhaps obscurely playful, in at least two different ways). You probably wouldn't get that without an explanation, so I'll try to provide one. The picture above is of Daniel Aaron, an American writer and academic.

[However, let me digress, first, before proceeding to talk about Aaron.]

My wife Marilyn, a ferocious lover of all things related to Herman Melville, and the daughter of missionaries, might or might not know what I discovered in obtaining that link to Aaron's name, as found in the first paragraph: Aaron's first scholarly paper, published in 1935, was titled, "Melville and the Missionaries." Wikipedia is truly a treasure trove of information! I'm betting that Marilyn, if and when she gets around to reading this blog posting, will go out and search for that article.


[To return from this familial digression]:

Aaron died recently at the age of 103, and this very nice picture of him accompanies a column by Jane Miller, which ran in the June 2016 edition of In These Times. Miller resides in Britain, and here is what it says at the top of the page where her column appears (as it appears in the hard copy edition): "From the Old Country."

Since Miller is addressing the topic of aging and dying in her June 2016 column, "Shuffling Off the Mortal Coil," the reference in the page heading that identifies her column as "From The Old Country" carries a kind of double meaning.

Same with my title. As I began to write about Miller's column, in fact, I realized that my own blog postings have recently been somewhat focused on death and dying. That probably reflects my own chronological status. Former San Francisco Chronicle columnist Jon Carroll would undoubtedly put it this way: "Because Old."

If my thinking continues in the death and dying vein, maybe I should rename my entire blog, "From The Old Country." The meaning of my current Two Worlds title is not, I well know, immediately obvious to the first-time or uninitiated reader.

The point of this posting is basically to recommend Jane Miller's very short, one-page tribute to Daniel Aaron, and to her thinking about human mortality, death, and dying.  Here is what Aaron told Miller about death: "Get used to it."

That's good advice, and I suggest that maybe Peter Thiel should give Miller's column a look!

And one more playful point: As this blog entry gets posted, I'm off to England myself, so this posting is "From The Old Country" in more ways than one.