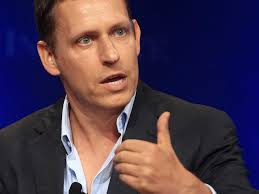 Peter Thiel, pictured, is one of those high-tech billionaires, based in the Silicon Valley, that we keep reading about. Why do we take them so seriously? Why do we care? If they're rich they must be right. Right?

Thiel has been in the news most recently as a prominent supporter of presidential candidate Donald Trump. If you click that link, you'll get to hear his six-minute speech to the Republican National Convention in Cleveland. If you'd like a more comprehensive overview of Thiel's politics and other preoccupations, try clicking the following link, for a New Yorker article by George Packer.

Frankly, there's a lot to like in what Thiel said to the Republican Party. His critiques are rather well-taken, and his policy suggestions seem more like the Democratic Party Platform than anything the Republicans have ever advocated. For instance, he says that too many economic rewards are going to the super-rich and not enough to that other 99% (though he doesn't use that phrase). The major flaw in what Thiel says, from my perspective, is that he concludes that the way to accomplish the policy prescriptions he advocates is by electing Donald Trump to the presidency. To quote my favorite poet/singer/songwriter: "I just said, 'good luck.'"

I am not writing, today, about Thiel's politics, though his political pronouncements could be seen as relevant to the point I want to make. They betray a kind of narcissistic self-assurance, which is a huge human flaw. It is also a flaw that definitely bonds him with his preferred candidate.

I want to highlight another example of Thiel's narcissistic self-assurance; namely, the idea that obtaining blood transfusions from younger people ("young blood," as the newspapers report it), is a worthwhile route to extended longevity. Thiel is apparently shooting to live to be 120 years old. Michelle Quinn, writing for the Bay Area News Group, has reported this fact in a column that makes a more general observation:

Hang around Silicon Valley for awhile and the obsession with immortality is clear. Techies want to solve that granddaddy of problems: Death.

The idea that human beings should be able to defeat death is a a dream of longstanding. And a hugely mistaken ambition. The World of Nature, upon which we depend, is a world that utilizes death as an important feature, and a feature, incidentally, that makes possible the continuing miracle of life. Defeating death as a way to become the rulers of the World of Nature is not only a vain ambition; it is a wrongly-directed one.

Thiel and other "techies" are wrong to seek to "solve the problem of death." And since we're talking about him, Thiel's political preferences are wrong, too. Both he and Donald Trump have the wrong idea.