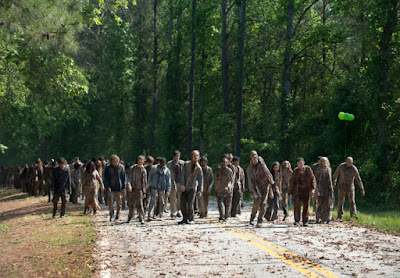 I don't watch a lot of television, so I haven't watched even one episode of The Walking Dead, which my internet search says is just about to begin its seventh season. I also uncovered a prediction, looking online, that the series may go to 20+ seasons before it's done. I feel compelled to add, as a kind of bitter footnote, but an appropriate one, given the subject matter, that this prediction assumes there will be an audience around to watch it, twenty seasons in.

I happened to think about "The Walking Dead" as I finished up my blog posting from yesterday, the title of which featured the Four Horsemen of the Apocalypse. Paul Watson, whose excellent article I referenced yesterday, says this:

I have seen the future written in the patterns of our behavior, and it is not a pleasant future, in fact it is not much of a future at all.

The four horses have arrived. As death sits astride the pale horse, the other three horses of pestilence, famine and war and terrorism are stampeding at full gallop toward us while our backs are turned away from them. And when they trample us, we may look up from our latest entertainment triviality to see ourselves in the dust of the ecological apocalypse.

According to Wikipedia, The Walking Dead attracts more 18- to 49-year-old viewers than any other cable or broadcast television series, and it's not the only television series that features "zombies," and other such creatures. I do watch Game of Thrones, where the horrifying "White Walkers" are an ever-looming apocalyptic threat: 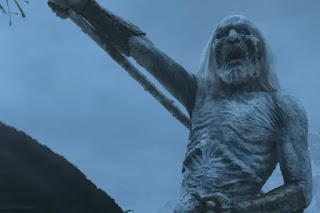 Could it be that the television series and other media featuring people who are "dead," but who keep on walking, appeal particularly to younger persons because young people can so clearly identify?

Could it be that young people today feel that they, too, are the "walking dead," and that the young people paying attention to "zombies" are are searching, as humans always do, to understand themselves better, and to understand their situation, and to find some guidance about what they should do?

I haven't watched even one episode of The Walking Dead, but I fear that this may be an explanation for its popularity.