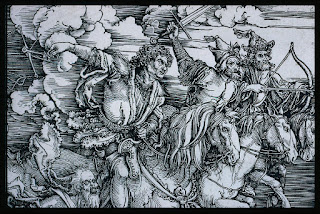 I have made a commitment to myself to write an entry into this Two Worlds blog each day. So far, that totals to more than 2,400 daily postings.

It is not that easy to write something worthwhile each day, so naturally I fudge. Generally, I do that by alerting readers to something worthwhile that someone else has written. Today, let me highlight an essay by Captain Paul Watson, founder of the Sea Shepherd Conservation Society.

Watson has written an article titled, "The Laws Of Ecology And The Survival Of The Human Species." It is definitely worth reading! Watson's article makes one of the main points that I have wanted to make as I write this Two Worlds blog, and Watson's words have given me the title to my posting #232 - The Four Horses Have Arrived:

We made the mistake of declaring war on nature, and because of our technologies it looks like we are going to win this war. But because we are a part of nature, we will destroy ourselves in the process. Our enemy is ourselves and we are slowly becoming aware of that indisputable fact.

Watson is watching our ocean waters, and is telling us what he sees. Others are watching the land. I became aware of Watson's article by a Facebook posting that I saw on Sunday, August 7th. That day, the San Francisco Chronicle ran an extensive article (possibly available online only to Chronicle subscribers) that documents the death of millions upon millions of trees in the Sierra Nevada, with millions more deaths to come:


Using technology that has diagnosed problems in the Amazon rain forest and the jungles of Borneo, the researchers are learning that California’s unprecedented tree die-off is moving well beyond its origins in the southern Sierra Nevada and along parts of the southern coast. It’s creeping farther north, and to higher elevations, not only providing tinder for wildfires, but also obstructing the forests’ fundamental ability to provide clean water and absorb carbon dioxide.

“It’s not just the numbers of trees lost. … It’s the implications,” said Asner, who works out of Stanford University when he’s not in the air. “The scientist in me is quite happy that we have a predictive capability, but the human in me and the naturalist in me is quite shocked.”

How many shocks will it take to galvanize some action? To get us to change our ways?