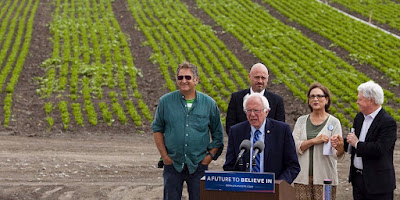 Pictured behind Bernie Sanders are (from left to right): Andy Hsia-Coron, an anti-fracking activist and labor union organizer from San Benito County; David Braun, with Americans Against Fracking; Margaret Rebecchi, an environmental justice advocate from Monterey County; and me.

This picture was taken at an anti-fracking press conference held by Presidential candidate Bernie Sanders, in Spreckels, California, on June 1st of this year. I got to speak briefly and then introduce Sanders to a small crowd of about fifty to sixty persons, including members of the national press corps. Santa Cruz County Supervisor John Leopold was in the crowd, honored for having achieved passage of an anti-fracking ordinance by the Santa Cruz County Board of Supervisors.

I am told that Bernie Sanders smiled as he listened to my introduction. I think I know why. Sanders is a member of the United States Senate, representing the State of Vermont, and he is running for President. In introducing him, I neglected to mention those facts, and identified Sanders as a former local government official from Burlington, where he served as Mayor.

I was trying to make a point, in phrasing my introduction in those terms, and I believe Bernie got it. The kind of "political revolution" that he has been talking about, all during his Presidential campaign, has to begin at the "local" level. I'll be representing Bernie as a pledged delegate at the Democratic National Convention in Philadelphia in late July, and one reason I feel so confident that Bernie would do a great job as President is that he did a great job at the local level, where elected officials are definitely and directly responsible to the people who elected them.

Bernie is different. He knows, because he was a local official, how a healthy politics is actually supposed to work.

If you want to be in politics, start small. Run and serve in local office. Later on, you can run for President, and you'll be a better person for it.