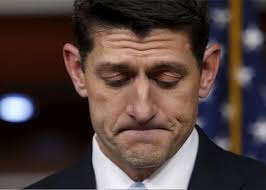 As I neared the end of my twenty years in elected office, I drew up a list that I called, "Five Simple Things." These were five "rules," or "best practices," that that any good officeholder should adhere to, at least in my opinion.

Number Five on my list was, "Be Honest." Here is how I explained that admonition:

I am very sorry to report that the Speaker of the House of Representatives, Paul Ryan (pictured above), has failed the "Be Honest" test.

Last Thursday, I opened up my morning paper to read about the sit-in that was taking place in the House, as House Democrats, following the lead of civil rights hero and Member of Congress John Lewis, demanded that the House leadership permit a vote on legislation to address the horrific epidemic of gun violence afflicting the nation. Ryan, who controls the conduct of business in the House, "dismissed the protest as 'nothing more than a publicity stunt.'"

Ryan went on to say, in an interview on CNN, that "the House will not vote on a 'bill that takes away a person's due process.'"

Query whether the proposed legislation would actually take away a person's "due process," but assuming, for the sake of argument, that it would, what's the problem with taking a vote on that?

"Voting" on a piece of legislation is how our elected officials most directly let the citizens know what the elected representatives "really think." If Ryan and other Members of the House of Representatives (mostly Republicans, I gather) really believe that it would be a denial of due process to prevent a person who is on an official terrorist watch list from buying an automatic weapon, then the best way to communicate how much they object to that sort of bill would be by voting on it - and voting "No."

That kind of vote, recorded, and available to the voters who will review the performance of their elected officials, would let voters know what the elected officials think, and if they didn't agree, maybe they'd elect someone else to represent their interest.

There is a principled argument why the legislation in question should not be enacted. But by preventing a "vote" on a bill that he claims would be a denial of due process, Mr. Ryan deprives the citizens who elected all those Republican Members of Congress an opportunity to know what their elected officials actually think about gun control, and to be "in charge" of politics.

Sorry, Mr. Speaker, there is no principled argument that would support the right of an elected Member of Congress to "hide the ball," and to "duck a vote," and to deprive the people who elected that representative of the right to know what she or he really thinks.