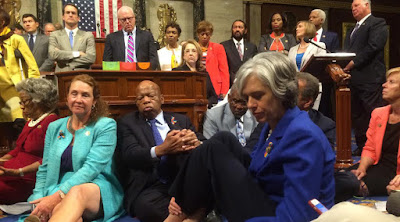 Members of the House of Representatives, led by Congress Member John Lewis (a Democratic Congress Member from Georgia, and a civil rights hero, shown at the center of the picture above), carried out a sit-in on the floor of the House, demanding that the House of Representatives be permitted to vote on a bill that would prevent persons on a terrorist watch list from buying automatic weapons.

The first obligation of political leadership is to maintain order.

I would suggest that The Journal is wrong, and that the first obligation of political leadership is to find a way to make our political institutions respond to the needs and desires of the people.

It may be (though I doubt it) that the people of the United States actually want the current situation to continue, in which it is possible for virtually anyone to buy the kind of automatic weaponry that is designed to be used on a military battlefield.

The first obligation of political leadership is to make our political institutions work the way they are supposed to.

Many thanks to John Lewis, and to the Democrats who sat with him, who are trying to do just that with a dysfunctional Congress that can't, apparently, do anything at all.

Not even, it appears, allow a debate and vote on one of the issues that most concerns the public.