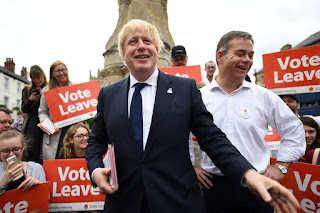 Pictured above is Boris Johnson, formerly the Mayor of London, and one of the main advocates for the recent decision by Britain to leave the European Union. After this "Brexit" vote, Johnson may well end up being the next British Prime Minister. When I saw that picture, in the June 25-26 edition of The Wall Street Journal, I thought Johnson looked a lot like Donald Trump. Trump, of course, may end up being the next President of the United States.

Google's facial recognition software confirmed my impression (at least somewhat). When the above photograph of Johnson is imported into Google "Images," one of the matches that comes up is the photo immediately below. Admittedly, "Images" finds a lot of pictures of NASCAR drivers, too, and calls them a match, but Trump is identified by software as a Johnson look-alike. I mean, if you need software to confirm your own impression. 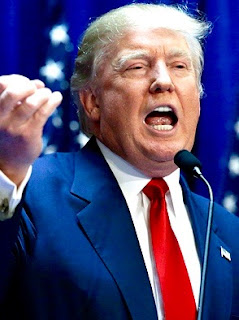 Many commentators have noted political similarities between Johnson and Trump, and these are perhaps more important than the physiognomic similarities.

The Wall Street Journal article that featured the picture of Johnson called the British election a "rebuke to the establishment."

An opinion piece in the same edition of The Journal was titled, "A Peasant Revolt Upends Britain's Ruling Elite."

The June 25, 2016 edition of The New York Times also covered the British vote, and had a front-page article with this headline, as the article appeared in the hard copy version of The Times: "Strength of Populist Revolt Is Felt on Both Sides of the Atlantic."

For those who would not like to see Mr. Trump as the next President of the United States, and I am betting that this includes many who are reading this posting, I suggest that we all need to pay attention to the results in Britain. I am not the only one who thinks that, either. Click this link to consider an article from the June 26, 2016 edition of The New York Times that says as much.

David Cameron, the British Prime Minister who lost the election to the Donald Trump look-alike, isn't exactly the same as Hillary Clinton, of course. He is, among other things, of a different gender; however, there are some similarities. For instance, Cameron's last name begins with a "C," just as Clinton's does. More pertinent than either gender or the orthography of the two politicians' last names, and I am sure you will agree with this, is the basic political background and political predispositions of Cameron and Clinton. There really are some substantive points in common.

Cameron is a basically decent, experienced, hard-working, national political leader whose record indicates that he was more responsive to the nation's elites than to its common people. Hence, the "peasant" or "populist" revolt that gave rise to the vote to leave the European Union.

Favoring the elites over the ordinary people wasn't a winning formula for Cameron.

I doubt it will work for Clinton, either, who very much shares with Cameron a propensity to hang out with the elite types!

So, here's my advice. If, come November, we want to stay away from a look-alike politics in the United States, with Donald Trump becoming our next President, then the upcoming campaign for the Presidency had better put the Democratic Party clearly on the side of the 99%, not the 1%.

If that doesn't happen, there is every reason to think that Hillary Clinton, our "political ace," may just get Trumped!