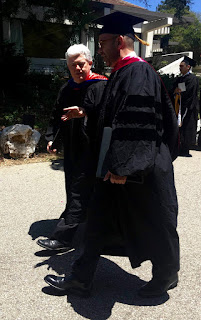 On Sunday, June 12th, I took part in the Stevenson College graduation ceremonies at the University of California, Santa Cruz. This picture proves it.

A couple of days earlier, on June 10th, I attended the Legal Studies and Politics Reception for graduating seniors. This reception was held at the Merrill College Provost's House. I have no pictures to document my presence, but here's what I heard from two student speakers, representing their graduating colleagues in the Politics Department, and in the Legal Studies Program (in which I have been teaching over the past several years).

Jack Davis, speaking for graduating seniors in the Politics major, pretty much echoed what I have recently been writing about in these blog postings. A healthy politics demands discussion and debate, and all views must be heard. Apparently, Davis works as a stand up comic. It showed. Hannah Arendt would have been proud of his presentation, but he made the message into something that seemed to be a lot more fun than Arendt's  essays.

Speaking for graduating seniors in the Legal Studies major was Emmanuel Garcia, one of my own students. He had a sober message to deliver, and one that was right on point.

In politics, says Emmaneul, persistence pays off: PRESS ON.

Hannah Arendt would have agreed with that advice, too!
Image Credit:
Personal Photo - Gary A. Patton