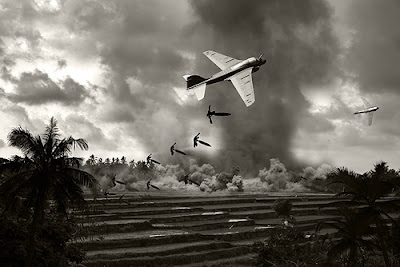 The picture above was used to illustrate an article in Counterpunch.  The image is not that different from the image I used for my June 18, 2016 blog posting, "Generals For Gun Control." Both images depict aerial bombardments of villages in Vietnam.


On May 16, 2016, former Nebraska Senator Bob Kerrey was named chairman of Fulbright University, a US-backed college with ties to the State Department in Ho Chi Minh City [Vietnam]. During his recent visit to Vietnam, President Barack Obama heaped praise on Kerrey, a former Navy SEAL who served in Vietnam from 1967 to 1969. What Obama failed to mention is that Kerrey also supervised one of the most atrocious war crimes of that ghastly war. The unit he lead killed women and children during an assassination mission in 1969. Some of the victims had their throats slit. Instead of being charged with war crimes, Kerrey was awarded a Medal of Honor for his role in another operation that year in Nha Trong Bay. Today we reprint Douglas Valentine’s ground-breaking piece on Kerrey’s raid on Thanh Phong Village that appear[ed]in the May 2001 edition of CounterPunch.

I became aware of what happened in Thanh Phong from another article. That article was published in the Monday, June 20, 2016 edition of The New York Times. The Times' article was written by Viet Thanh Nguyen, and was titled, "The 'American Tragedy' of Vietnam." It took issue with Kerrey's recent appointment as Chairman of the American-sponsored Fulbright University Vietnam. That school, established by the Fulbright "Trust For University Innovation In Vietnam (TUIV)," proclaims itself as "the first private, nonprofit Vietnamese university founded on the principles of accountability, meritocracy, transparency, self-governance, mutual respect, and open inquiry."

Let's just highlight the "accountability" part of that grand pronouncement. As Viet Thanh Nguyen implies, one might question how much "accountability" is being demonstrated by the University when it puts a person in charge of the school who led a team of Navy SEALS to kill twenty unarmed Vietnamese civilians, including women and children.

Read both articles. They are worthwhile. I want simply to highlight one point, made by Viet Thanh Nguyen. He quite properly says that the Vietnam war is now, largely, regarded in the United States as an "American Tragedy," with Americans paying scant attention to what happened to the Vietnamese victims of American actions.

The true "tragedy," for me, is that the United States government (unchecked by the American people) appears to have learned nothing from its atrocious conduct in Vietnam. As I pointed out on Saturday, we are now bombing the villages of innocent persons living in various countries in the Middle East, and U.S. troops are on the ground, carrying out missions not unlike the mission that former Senator Kerrey carried out in Vietnam.

I was part of an antiwar movement that finally, after years of struggle by antiwar activists, compelled the United States government to end the War in Vietnam. I thought, at the time, that the ultimately successful efforts to stop that war would surely mean the end of any future such wars by my country.

I was wrong, and THAT is a tragedy, indeed! The tragedy can be called "American" only because it is the United States that perpetuates the tragedy, and that continues to kill and destroy in the name of "democracy," supposedly acting for me.