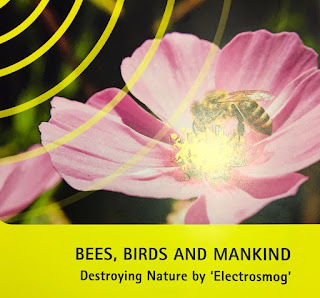 On Tuesday, June 14th, the Watsonville City Council decided to deny a request by Verizon Wireless that the company be permitted to erect a cell tower on property located on Ohlone Parkway. One of the people who testified at the City Council hearing gave me a copy of the above publication, by Ulrich Warnke, which discusses the impact of electromagnetic radiation on bees and other species. Warnke claims that electromagnetic radiation is "disrupting nature on a massive scale."

This issue was absolutely NOT a factor in the Watsonville City Council decision. In fact, the City Council was prohibited from even thinking about the environmental impacts of the electromagnetic radiation associated with cell towers.

Just so you know, here is what the United States Congress has said about this issue:

No State or local government or instrumentality thereof may regulate the placement, construction, and modification of personal wireless service facilities on the basis of the environmental effects of radio frequency emissions ...

Is this a good thing? Maybe not, at least according to Pearls Before Swine, which is one of my favorite reasons to pick up the comic section of the newspaper each morning: