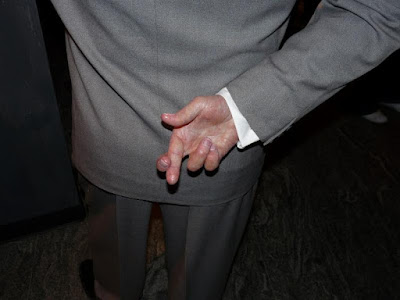 Corey Robin is a professor of political science at Brooklyn College and the CUNY Graduate Center. He is the author of The Reactionary Mind: Conservatism from Edmund Burke to Sarah Palin and Fear: The History of a Political Idea.

In an article titled, "When Advertising is Action: Clarence Thomas Channels Hannah Arendt and Friedrich von Hayek," Robin has something rather thought-provoking to say about Supreme Court Justice Clarence Thomas. Robin cites Thomas' recent concurring opinion in a Supreme Court decision that struck down a Massachusetts ban on tobacco advertising as a defense of political speech:

Promoting a product that is not yet pervasively used (or a cause that is not yet widely supported) is a primary purpose of advertising. Tobacco advertisements would be no more misleading for suggesting pervasive use of tobacco products than are any other advertisements that attempt to expand a market for a product, or to rally support for a political movement. Any inference from the advertisements that business would like for tobacco use to be pervasive is entirely reasonable, and advertising that gives rise to that inference is in now way deceptive.

According to Robin, the phrase bolded above, in Thomas' opinion, shows that Thomas appreciates what advertising, including political advertising, is really all about (misleading those subjected to that advertising), and that this defense of political "lying" is a very good thing.

In his concurring opinion in Lorillard Tobacco Company v. Reilly, Thomas is mainly interested in defending the right of commercial interests to be able to mislead consumers, but Robin salutes the idea that the right of political interests to do the same thing, where the voters are concerned, is the essence of First Amendment free speech.

Roger Berkowitz, Academic Director of the Hannah Arendt Center for Politics and Humanities at Bard College, validates Arendt's support for the point that Robin is making:

Robin is correct that Arendt understands the political role of the liar. Politics for Arendt is about opinion and some opinions are absolutely essential to our liberal democratic world. For example, the idea that "All men are equal" is one of those lies, those fictions, that Arendt argues is a great achievement of modern politics. Of course not all men are equal in any factual sense. But the political conviction that we are politically equal underlies the possibility of politics. Such is the kind of political lying that Arendt recognizes as important.

"Lying," and "lying politicians," are not much celebrated, at least normally, so the supportive words of Robin and Berkowitz should stimulate our thinking. Berkowitz does caution us about the dangers of political lying, as indicated in the long quotation below. But before addressing the caution, let us understand the positive point that both Robin and Berkowitz (and Arendt) are making.

In politics, the essence of which is debate and discussion, controversy and conflict, resulting in a decision about what we should, collectively, do, it is imperative that no "authority," like the current government, be able to say that certain ideas, or certain aspirational statements are "lies," or are "misleading," or are "untrue." By stifling political speech on the basis that it is full of "lies," a government exemplifies the kind of totalitarian control over speech that is the opposite of democratic debate.

"Free speech" must actually be "free," and permitting the prevailing authorities to decide that some speech is "misleading," and thus that it should be banned, is a short route to dictatorship.

"Lying" is "central to politics," says Berkowitz, in the edition of the Amor Mundi newsletter published on Sunday, June 12th (click this link if you'd like to sign up), but his defense of "political lying" having been made, Berkowitz ends with a warning. Hoping that you have absorbed the point just made, above, I will end this post by letting Berkowitz tell us just why lying in politics is a huge danger (as well as an inevitable component of a politics based on free speech).

At a time when the Republican Party nominee for President is clearly a liar, and when the Democratic Party nominee has also been caught in significant prevarications, the following words of warning from Berkowitz are pertinent:

As central as Lying may be to politics, certain lies corrode politics. The lies we should worry about, Arendt writes, are those active lies whereby facts are denied and alternative realities are created. When deception, spin, and propaganda become the driving forces of politics, facts retreat behind the need for consistent talking points and coherent narratives. The essence of totalitarian rule is the elimination of those facts and persons whose reality counters the coherent fiction underlying the state. And even in non-totalitarian states, the reduction of facts to simply another opinion corrodes the common sense and shared world that underlies a civil and engaged political sphere. The possibility of politics depends upon the continued availability of commonly accepted facts and pre-political truths that bind a polity together.

In a time of seemingly infinite information, we are experiencing unprecedented doubt about facts. All kinds of "authoritative" claims made by leading public figures turn out to be little more than thin air. Facts, as Arendt saw, are all around us being reduced to opinions; and opinions masquerade as facts. As fact and opinion blur together, the very idea of factual truth falls away. And increasingly the belief in and aspiration for factual truth is being expunged from political argument.

While Arendt understood that lying could be useful and even was the essence of some politics, she also knew that the loss of factual truth in the political realm is an existential threat to politics and also to human life in general. Arendt rejects the classical maxim fiat justitia, et pereat mundus (Let justice be done, even if the world perish); instead she endorses the reformulation: Fiat veritas, et pereat mundus. Let Truth be done, though the world may perish. Her point is simple: We cannot give up on truth-even if it means the end of the world! This is because the loss of truth leads to the loss of the world. Without truth, without the ability to say what is, there is no permanence, no common world. The danger is that when truth disappears, the world wobbles. We lose our bearings. We lose what holds us together-the common sense and common assumptions-that are the furniture and stability of our human world.

Arendt's worry is that when truth is impossible, when truth disappears, when the world wobbles, the result is cynicism. As she writes: "It has frequently been noticed that the surest long-term result of brainwashing is a peculiar kind of cynicism-an absolute refusal to believe in the truth of anything, no matter how well this truth may be established." In other words, the danger from a consistent and total substitution of lies for factual truth is not that the lie will win out-that is highly unlikely. Rather, the danger posed by the demise of factual truth is the victory of cynicism, the belief that it is simply not possible to "say what is." What cynicism means is that the sense of factual truth from which we take our bearings in the real world is wasting away.