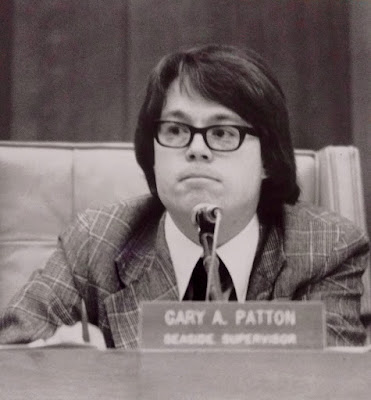 Those familiar with the various functionalities of Facebook will understand that certain Facebook postings, once posted and forgotten, can come back from the past. Facebook picks out past postings, by some algorithm that Facebook knows, but does not reveal to its users, and suggests to the Facebook user that such past postings should be posted once again. Generally, such suggestions from Facebook come with an advisory that "you have memories...."

I do have memories. No doubt about that! My memory is probably not all that reliable, though, when I am challenged to remember events and feelings over forty years old.

The photo above is over forty years old, depicting a very much younger Gary Patton, during my first term on the Santa Cruz County Board of Supervisors. I was only twenty-nine years old when I was first elected to the Board, in 1974, and at that time I was the youngest County Supervisor in the State of California. I had posted this picture to my Facebook page about a year ago, I guess, and Facebook thought it was time to let my Facebook Friends see it once again.

Did Facebook know that this photo was actually a memory from forty years ago, not one year ago? I don't know, but I do know that when I did post the photo again, about a week or so ago, the photo stimulated lots of comments from those who remembered me from way back when. One Facebook Friend asked this question: "Were you happier then?"

In thinking about how to respond to that inquiry, I realized that I couldn't really say that I was happier in 1975, when the picture was taken. And I couldn't really say I wasn't happier, either. Upon reflection, I don't think it is my failing memory that makes it impossible for me to give any kind of a confident answer to what seems like a reasonable question, "were you happier then?"

My mother often told me that "comparisons are odious." That is a venerable piece of advice, which apparently dates from the mid 15th century. The phrase was so common in Shakespeare's time that he could make fun of it, having Dogberry, in Much Ado About Nothing, claim that a comparison was "odorous."

The process of comparison can lead to an implicit suggestion that different things can be made to compete against each other, to the end that one of the things can be determined to be, in some way, "better" than the other. I think that this is likely a mistaken way to try to make sense of the world, because different people, different things, different experiences, and different times of life are not, really, in competition at all. They are just different, not better or worse. Celebrating differences, not ranking them in terms of what is "better" or "worse," is actually the most accurate way to evaluate the world in which we live. Our world is nothing but differences, all the way up and all the way down!

Was I happier then? Not the right question, I think. I was happy then. I am happy now. Happy every day,

Happy just to be alive, underneath that sky of blue!