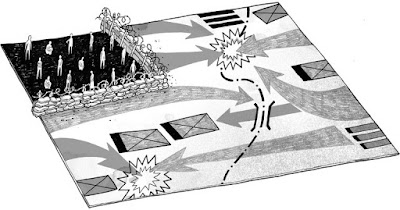 Stanley McChrystal is a retired General in the United States Army. In other words, this is a guy who knows about guns (and other weapons). In an opinion piece in the June 17, 2016 edition of The New York Times, McChrystal came out in favor of gun control legislation, to "keep guns out of the hands of those who cannot be trusted to handle them responsibly."

What we need to avoid, said McChrystal, is a situation in which "our communities ... feel like war zones." McChrystal's article bore this title: "Home Should Not Be A War Zone."

I want to join with McChrystal in saying that "home should not be a war zone." But let me ask this question: Does that same principle apply to Iraq? Or to Afghanistan? And what about Syria? What about Libya? Presumably, we all remember the pictures of what United States military operations, some of them directly commanded by McChrystal, did in those countries. U.S. Military operations have turned the homes of other nations into "war zones," with drone strikes, on the ground military operations, naval bombardments and aircraft bombing runs. The picture below is from Iraq, and is labeled as "collateral damage." We started that war. McChrystal played a leading role in causing scenes like this one: 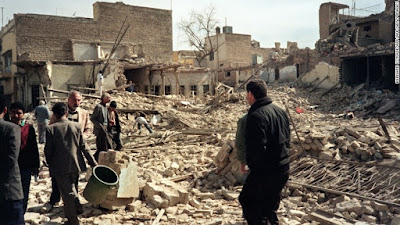 In the article from which the above picture was taken, readers are reminded that the United States has a long history of bombing the homes of other peoples "back to the stone age," to use the colorful, but largely accurate, language of General Curtis LeMay. Here for nostalgia buffs, is a picture of a United States aviator destroying Ben Tre, a village in Vietnam: 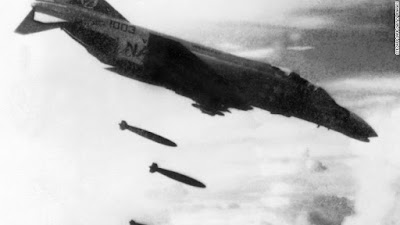 There is at least some evidence that the recent and horrific events in Orlando, Florida were the result of someone trying to achieve retribution, in this country, for what this country is doing to the homes of those living in countries that the United States government has decided have something to do with "terrorism."

Ask the ordinary people whose homes are being destroyed by the United States military who they think the terrorists are. Their answer will almost certainly be that the greatest purveyor of terror today is the United States government (and specifically its military troops and the private contractors who have properly been identified by Bob Dylan as the Masters of War).

Want to stop terrorist efforts from targeting U.S. communities, and trying to turn them into war zones? Let's stop doing to others what we do not want them to do unto us!