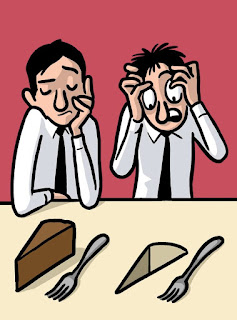 James Surowiecki, who writes a column for The New Yorker called "The Financial Page," has told us, in his column published in the June 6 & 13, 2016 edition of the magazine, that "loss aversion promotes caution only when people are considering gains; once people have sustained losses, impulses change dramatically." In other words, we are generally more willing to take risks when we think we're losing, not when we think things are getting better.

Surowiecki suggests in his column that the nature of our current presidential politics reflects this truth, particularly on the Republican side. Surowiecki is basically focused on the phenomenon of the Trump ascendency, and one purpose of his column is to serve as a kind of advisory to Hillary Clinton (presumed, for the purposes of this column, at least, to be Trump's Democratic Party opposition).

"Hillary Clinton," Surowiecki says, "has recently been emphasizing what a risk Trump represents. That's fine when rallying the Democratic base and appealing to genuine independents. But it will only make Trump more popular with those who already believe in him. When he says, 'We're losing our country,' it doesn't sound overwrought to his supporters. It sounds like the truth."

If we were to consider the other contender for the Democratic Party nomination, Bernie Sanders, employing the same analytic method, it becomes pretty clear why Sanders is such an attractive candidate to the "Democratic base." It is not just Trump supporters who believe that we are "losing our country." LOTS of people think that's true, including many people who can be categorized as part of the "Democratic base."

Take me for example!

Our willingness to take risks when we think we're losing is, after all, a fairly rational behavior. If we think we're heading in the wrong direction, then maybe we ought to risk a change in course. Maybe such a risk will pay off, or maybe it won't, but when we truly think we're "going wrong," it does make a lot of sense to try something new.

That is an argument for Bernie Sanders, I'd say, and a much better argument than the argument for Donald Tump, when you realize what "risks" Trump is proposing, versus the "risks" of the policies being advanced by Sanders. As Hillary Clinton showed, in her excellent speech about Trump and foreign policy, Trump is in favor of nuclear proliferation.

Now, that is a REAL risk!

Bernie Sanders is in favor of trying to replay the New Deal of Franklin D. Roosevelt. There is risk in that, too, of course, but speaking for myself, that's a risk I'd like to take.