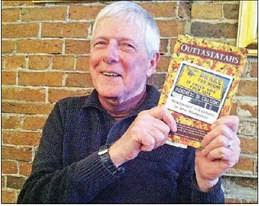 Today is Election Day in California. If enough voters in the 20th Congressional District vote for Bernie Sanders for President, then I will be able to go to the Democratic National Convention in Philadelphia, in late July, as a pledged delegate for Bernie Sanders.

I am looking forward to that! Vote for Bernie!

I have a special reason for wanting to go to the Convention - beyond the obvious reason that I'd like to do everything I can to support the selection of Bernie Sanders as the Democratic Party nominee for the Presidency. I am looking forward to meeting that "other" Gary Patton.

Pictured above is the pro-Hillary Clinton version of Gary Patton. That's right! There are Gary Pattons on both coasts. The Gary Patton above is from New Hampshire (where Bernie trounced Hillary in the primary election). Just type "Gary Patton Democrat" into a browser, and you'll be connected up with the Gary Patton above. He's described as a "78-year-old Clinton loyalist," and I have been hearing about his political exploits for years. I have an idea he might turn up in Philadelphia, and that would be pretty fun.

I'm thinking I could swing him to Bernie. I'd try at least.

It's all in the family!