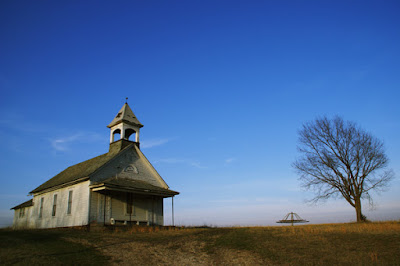 The image above, depicting a rural "one-room school," is from an article by Danielle Allen, who is a professor in the Government Department at Harvard University and at the Harvard Graduate School of Education, as well as the Director of the Edmond J. Safra Center for Ethics at Harvard University. Prior to joining the faculty at Harvard in 2015, Allen was UPS Foundation Professor at the Institute for Advanced Study in Princeton, New Jersey.


So what exactly is participatory readiness, and how can education help people achieve it? To answer these questions, we first need to understand what students should be getting ready for: civic agency. While there is no single model of civic agency dominant in American culture, we can identify a handful at work. Following philosopher Hannah Arendt, I take citizenship to be the activity of co-creating a way of life, of world-building. This co-creation can occur at many social levels: in a neighborhood or school; in a networked community or association; in a city, state, or nation; at a global scale. Because co-creation extends beyond legal categories of membership in political units, I prefer to speak of civic agency instead of citizenship. Such civic agency involves three core tasks. First is disinterested deliberation around a public problem. Here the model derives from Athenian citizens gathered in the assembly, the town halls of colonial New Hampshire, and public representatives behaving reasonably in the halls of a legislature. Second is prophetic work intended to shift a society's values; in the public opinion and communications literature, this is now called "frame shifting." Think of the rhetorical power of nineteenth-century abolitionist Harriet Beecher Stowe, of Martin Luther King, Jr., or of Occupy Wall Street activists with their rallying cry of "we are the 99 percent." Finally, there is transparently interested "fair fighting," where a given public actor adopts a cause and pursues it passionately. One might think of early women's rights activists such as Elizabeth Cady Stanton, Susan B. Anthony, and Matilda Joslyn Gage. The ideal civic agent carries out all three of these tasks-disinterested deliberation, prophetic frame shifting, and fair fighting-ethically and justly. Stanton is an example of this ideal at work. At the Seneca Falls Convention, she was in deliberative mode for the debate about the text of the Declaration of Sentiments. However, before the convention's deliberations, when she drafted that text, she was in the prophetic mode, just as she was in her innumerable speeches. Finally, in campaigning for legal change, as in the adoption of the Woman's Property Bill in New York and similar laws in other states, she was operating as an activist.

My experience teaching Legal Studies students at the University of California, Santa Cruz, convinces me that Allen is correct. We can build a political world, together, that will make economic opportunity a priority; however, the key factor in building such a world is not individual accomplishment, but collective commitment. The education we provide students needs to help them be effective in the realm of self-government. That is, in fact, the best way to prepare them to create a future that will have abundant economic opportunities for them, and for all of us.

Arendt's idea of participatory citizenship helps understand how education can build a political world. But what kind of education leads to participatory readiness? It is not a technical education, and Allen rightly rejects the overriding focus on STEM as a means towards educational equality. She writes that educated citizens need "the ability to make sense of complex ballot propositions and follow argumentation about DNA evidence at trial." And she claims that graduates in the humanities are more likely to vote and more likely to become politically active than STEM graduates. Allen recognizes such correlations may be deceptive but believes that a humanities education will likely better prepare students for democratic citizenship.

Above all, the participatory ready citizen needs to know how to judge their government. Allen finds this idea deep in the Declaration of Independence:

"We hold these truths to be self-evident, that all men are created equal; that they are endowed by their Creator with certain unalienable Rights; that among these are Life, Liberty and the pursuit of Happiness-That to secure these Rights, Governments are instituted among Men, deriving their just Powers from the Consent of the Governed; that whenever any Form of Government becomes destructive of these Ends, it is the Right of the People to alter or to abolish it, and to institute new Government, laying its Foundation on such Principles and organizing its Powers in such Form, as to them shall seem most likely to effect their Safety and Happiness."


In the face of governmental failure and a failure of democracy, citizens need to know how to judge that failure and how to respond. We see stirrings of such a response in movements like Occupy Wall Street and the Tea Party. And these movements have led to political activists supporting Bernie Sanders and Donald Trump.

What is unclear is why education, let alone humanities education, helps prepare citizens to make such judgments-or to make prophetic insights and engage in fair fighting. To look back at the emergence of American democracy in New England town meetings and then in the 1790s in the republican and democratic debating societies, is to see that the radical and participatory roots of American democracy had little connection to education. Arendt always insisted that political skill was unrelated to one's education. The workers' counsels and debating societies Arendt lauded were not dominated by humanities graduates. Is there any evidence that education is connected to judgment?

One answer lies in the power of example. As any good humanities student knows, Immanuel Kant showed that there are no rules for making moral judgments. Sound judgment is not a product of education so much as it is of good upbringing and character. Arendt, following Kant, understood that judgment could only be taught, if at all, through example.