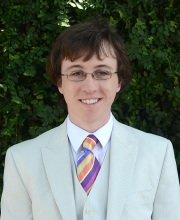 Pictured above is Nathan J. Robinson. Nathan J. Robinson is a PhD student in Sociology & Social Policy at Harvard University. He is, as you can tell from the picture, very young. Here is a link to Robinson's official biography and publications list. You don't even have to click; I'll tell you. There are NO entries. There are ZERO entries, at least at the time I am writing this.

Despite the lack of any entries in his online publications list, Mr. Robinson has, in fact, written something. What he has written is an article in Current Affairs, A Magazine of Politics and Culture. Robinson's article, dated February 26, 2016, is titled, "Unless The Democrats Run Sanders, A Trump Nomination Means A Trump Presidency." I read the article, and was intrigued (actually, I was impressed), and I decided to track down Mr. Robinson, and find out who he was. I did not expect to find out that he was just a "kid."

This is my "because old" bias showing! My apologies for using that term. I hope it will be taken in good humor. Having read Robinson's article with no knowledge of who he was, I was just not prepared for a "young person" as the author of what I thought was a very thoughtful and rather compelling opinion piece, outlining an argument that Bernie Sanders will be a much stronger Presidential candidate against Donald Trump than Hillary Clinton would be.

That does happen to be my opinion (and it was my opinion even before reading Robinson's article), but I am willing to wager that lots of those who might read this blog posting will not share my thoughts in this matter.

So, if you don't share my thoughts, please take a few minutes to read what Nathan J. Robinson has to say.

If you happen to be a Democratic Party "Superdelegate," Robinson's article really ought to be required reading.

Should we be paying any attention to what this kid has to say?

I think we had better!