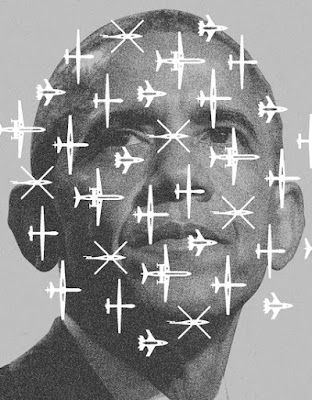 Jennifer Daskal is an assistant professor at American University Washington College of Law. She has written an important Op-Ed column, which appeared on the editorial pages of The New York Times on April 27, 2016. I urge anyone reading this blog posting to track down that column. Daskal's column was titled, "Obama's Last Chance To End the 'Forever War,'" and the image above ran with the column. You can click on the link to read what Daskal says.

On April 26th, the day before Daskal's column appeared, my UCSC Legal Studies class on "Privacy, Technology, And Freedom [LGST 196]" discussed the exact topic that Daskal addresses. The class did so by focusing on Hedges v. Obama, a case decided on July 17, 2013 by the United States Court of Appeals for the Second Circuit. Click on the Hedges v. Obama link if you'd like to enmesh yourself in an extensive discussion of Article III "standing" requirements, a discussion that is very important, but that is a bit hard to follow.

The Hedges case was an effort to end the "Forever War" through court action, but the court declined to act. How the court came to its conclusion reveals a great deal about how our judicial system works. Hedges is, thus, a wonderful case to "teach some law" to Legal Studies students. In short, the court decided in Hedges that none of the various plaintiffs had "standing," which meant that the court was not able to make a ruling on the legal and constitutional issues that the plaintiffs raised.

Those not especially interested in the intricacies of judicial decision making, and the "standing" requirement in particular, might still be quite interested in how our current, "Forever War" came into existence, and what, if anything, might ultimately stop it. What follows is a synopsis, and pretty much tracks the discussion my class had on April 26th.

On September 18, 2001, exactly one week after the September 11 attacks on the Twin Towers and other targets, the Congress passed, at the President's request, a piece of legislation that was NOT a "Declaration of War," but that was called, instead, an "Authorization for Use of Military Force (or AUMF)."

Here is the full text of the AUMF, as enacted by Congress on September 18, 2001:

Since the 9/11 attacks could not really be categorized as an "Act of War" by a hostile power, in the way, for instance, the attack on Pearl Harbor was categorized, Congress provided this "authorization" as a kind of substitute Declaration of War, to authorize the President to use military force against those responsible for 9/11. Note these features of the AUMF:

When one carefully considers the AUMF, it can be seen that the authority provided to the President is both "unlimited" and "limited" at the same time. Congress is essentially telling the President to "go get them," and by "them" Congress means, very specifically, anyone responsible for the attacks on  9/11. The "them" against whom the President is authorized to use virtually unlimited force is actually spelled out with particularity. While the President gets to "determine" who meets this test, the use of force is authorized only against "nations, organizations or persons" that "planned, authorized, committed, or aided the terrorist attacks that occurred on September 11, 2001."

Furthermore, the explicit "purpose" of the AUMF is to prevent any future acts of terrorism by the very same nations, organizations, or persons that carried out the 9/11 attacks. The AUMF does not provide any authorization to the President to use military force against terrorism at large.

Because the AUMF provides the President with the authority to go ofter only those who were, in some way, involved in the 9/11 attacks, it cannot not, quite clearly, serve as the foundation for a "Forever War," aimed at "terror" in general.

There is, though, a law that does provide for a "Forever War," and for the so-called "War Against Terror." That law that was promoted and signed by President Obama. Here is how the AUMF metastasized into a law that justifies a general "War Against Terror" that can, and almost inevitably will, go on indefinitely. Ten years after the enactment of the AUMF, on New Year's Eve, December 31, 2011, Congress passed and President Obama signed the National Defense Authorization Act (NDAA). Again, it was President Obama who sought and signed this update of the AUMF. Section 1021 of the NDAA does several things:

What has happened? The AUMF authorized a virtually unlimited amount of military force, but ONLY against those determined to have been involved in 9/11.

Under the NDAA, the authorization to use a virtually unlimited amount of military force remains (and is explicitly expanded to include the right to what amounts to an indefinite military detention). That force, however, is NOT limited to those involved in some way in 9/11. Under Section 1021(b)(2), this force can be used against persons and organizations who "are" (present tense, not past tense) in "hostilities against the United States."

It is this provision, in Section 1021(b)(2), that gives us the "Forever War." Are there "forces" that "are engaged" in "hostilities against the United States or its coalition partners?" Yes, and there are more and more of such "forces" every day. Every time the United States launches a drone strike, or enters onto a battlefield in Syria, or drops a bomb and blows something up, the "forces" that are hostile to the United States (or its coalition partners) grows. We are engaged in a never-ending conflict, and the NDAA authorizes the military to put people into indefinite military detention as long as this "Forever War" endures.

Daskal wants President Obama to seek to reduce his own authority, as that authority is now encompassed in both the AUMF and the NDAA.

I just say "good luck." Presidents don't, generally, give up their powers. The people have to take those powers back.

Daskal, in fact, acknowledges this point, and I think she demonstrates a sense of urgency. Her article is worth reading.

The Constitutional rights of ordinary people are very much at risk, from any current or future President who might "determine" that the armed forces should detain a United States citizen that the President thinks has "substantially supported" a person who may have committed a belligerent act that the President decides was hostile to the United States. Any such military detention of a U.S. citizen, or any other person, would be for an indefinite period, and under the current court cases, the person detained would have no right to counsel, no right to a speedy trial, no right to confront his or her accusers, and no right to petition the courts for habeas corpus.

"Forever" is a long time.

It would probably be good to get those Presidential powers rescinded sooner rather than later, particularly when we think about some of the folks who might end up being our next President.