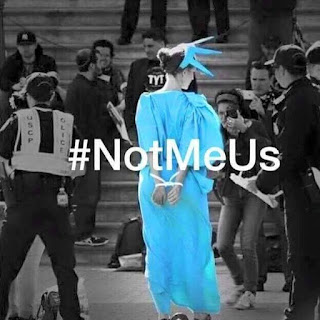 The picture is from the Democracy Spring website, with the hashtag added as an overlay. You can get the original by clicking the link at the bottom of this page. I picked up the amended picture from a Facebook Friend, and I like the image. I like the message, too. When our politics is healthy, a "NotMeUs" attitude is always present.

On April 2nd, 150 people set out from the Liberty Bell in Philadelphia and marched for ten days over 140 miles to Washington DC. From April 11th-18th, thousands more took mass nonviolent action on the steps of the US Capitol to give Congress a choice: either end the corruption of big money in politics and ensure free and fair elections or arrest hundreds of people, day after day, simply for demanding an equal voice.

1,400 arrests and eight days later, our message is clear: the American people will no longer accept the status quo of big money corruption and voter suppression. There will be a growing political cost to pay for candidates and politicians who defend corruption. We will disrupt their fundraisers, their debates, their press conferences, and ultimately, their chances at the polls. We will make 2016 a referendum on whether we have a democracy that works for everyone or a plutocracy that serves the wealthy few. Together, we will claim our democracy. Join us.

Direct, nonviolent action does produce results. Martin Luther King, Jr. brought that message home to America, and helped prove the point. Sometimes, at least that's the theory, elections can do the same thing.

I came across the picture of "Liberty in handcuffs" right after reading the Preface to a book by James C. Scott. Scott's book, Domination and the Arts of Resistance: Hidden Transcripts, is an anthropological study of class relationships in a Malay village.

Scott found, as he studied the village, that what people told him in public was often different from what they said in private. The private conversations were documented in those "hidden transcripts" that are referenced in the title to Scott's book. Here was the lesson Scott gathered from his research: there is sometimes a lot more sentiment in favor of economic, social, and political change than is visible in the public, and that "shows up in the media," as we might say.

I believe that the notion of a hidden transcript helps us understand those rare moments of political electricity when, often for the first time in memory, the hidden transcript is spoken directly and publicly in the teeth of power.

-- James C. Scott, Domination and the Arts of Resistance

Let's dig for those "hidden transcripts" that tell us what we, here in America, are really thinking - and what we are willing to do about it. Today, I am heading to a Bernie Sanders rally, in San Jose.

I am going to be looking for those hidden transcripts!