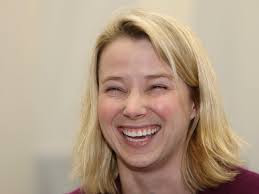 Why is Marissa Mayer laughing? In all fairness to the Yahoo CEO, this picture is dated from 2014. Mayer probably isn't laughing with quite the same exuberance or as frequently today as she did in 2014. She is having a tougher time right at the moment, as many critics, including those who hold major blocks of Yahoo stock, think that Mayer should be fired, and that the company should be sold for scrap. (Well, maybe I'm exaggerating about the "scrap" thing).

At any rate, while the picture above is not current, it does seem properly to reflect the points made in a recent column by Robert Reich. Writing on May 2nd, Reich used Mayer as an example of "Can't Lose Capitalism."

Marissa Mayer tells us a lot about why Americans are so angry, and why anti-establishment fury has become the biggest single force in American politics today.

Mayer is CEO of Yahoo. Yahoo’s stock lost about a third of its value last year, as the company went from making $7.5 billion in 2014 to losing $4.4 billion in 2015. Yet Mayer raked in $36 million in compensation.

Even if Yahoo’s board fires her, her contract stipulates she gets $54.9 million in severance. The severance package was disclosed in a regulatory filing last Friday with the Securities and Exchange Commission.

In other words, Mayer can’t lose.

It’s another example of no-lose socialism for the rich – winning big regardless of what you do.

The Reich column is worth reading. I think he is right on target with the points he is making.

I'd like to make a different, but related, point. How "profits" get distributed as between top managers and the workers is something that can be regulated by the public. That is, in other words, a "political" question. It is not inevitable that our system should be arranged so that there is a "no-lose socialism" for the rich, corporate elite, while the workers get "hyper-capitalism."  We could reverse that polarity.

To do that, naturally, would require something along the lines of a "political revolution." In fact, the debate about whether we should be shooting for such a reversal in policy is the main question in the Democratic Party Primary that is taking place right now, and that will culminate on June 7th, here in California. You can still register to vote, up until May 23rd. If you want to be sure that you can vote in the Democratic Party Primary election, you will need to register as a Democrat.

Click here to register to vote (or to reregister).

Robert Reich, former member of the Bill Clinton cabinet, is backing Bernie Sanders. You could, too! Maybe we should be trying to put some smiles on the faces of ordinary people. 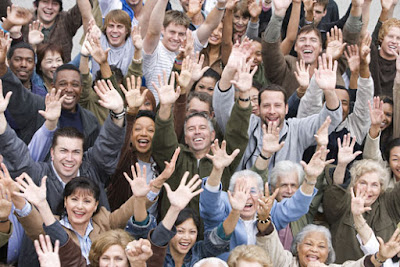