#133 / Five Reasons I Am Voting For Bernie Sanders

I served twenty years as an elected member of the Santa Cruz County Board of Supervisors, and was elected five times. During my time on the Board, our community made some fundamental changes, at the local level, that have profoundly affected the future of this community. We have permanently protected and preserved all our prime agricultural land. We have stopped suburban sprawl. We defeated the oil companies and stopped new offshore oil drilling not only off our own coast, but along the entirety of the California coast. We mandated that permanently affordable housing be constructed whenever any new housing was built, and we provided dedicated and enduring funding for community-based human service programs. I am proud to have been able to play a part in these changes at the local level.

We need even more profound changes at the national level.

The message from Bernie Sanders, in the video below, is a powerful message that outlines the kind of fundamental changes we need. I encourage you to watch this four-minute video.

Do we know, in any kind of detail, how we are going to solve the problems that Bernie Sanders is talking about? Are the solutions written down, right now, and immediately available? No. They are not. But here is what I say. We need to have a "To Do" list for this nation that includes a fundamental restructure of our economic and political life, and we need a President who will be dedicated to that kind of fundamental change.

Here are five reasons I am voting for Bernie Sanders (it's a partial list):

Bernie Sanders is pointing out the need for fundamental changes in our economic and political life in the strongest possible terms - in stronger terms than any other candidate. I agree with him, as do so many of us. However, many who agree that such fundamental changes are needed say that it’s not “realistic” to think that Bernie Sanders could actually achieve the kind of changes he is advocating, and that this is a reason to vote for the other candidate. I want a President who is going to try to do the things that need to be done, however hard that may be, instead of a President who tells me that the things that need to be done can’t be accomplished. I think politics is about creating the reality we actually need, not accepting a so-called “reality” that is delimited by what already exists. We need to CHANGE the current situation, not accept the current situation as the limit of what's possible.

I don’t believe that if someone is ahead in a political race, the other candidates should all drop out. Apparently, that is the way the Republican Party likes to run its primary contests, but I am for a politics that counts all the votes, and the winner is the one who has the most votes at the end. This means that the Democratic Party should make its choice after it sees which candidate gets the most delegate support in the various primary elections held around the country (including the primary in California, this nation's biggest state). It’s not over till it’s over! Voting for Bernie Sanders is the right thing to do if you think Bernie Sanders is the best candidate.

Frankly, the “old white guy” demographic is probably not the most desirable demographic for our political leadership at this time (and I say this as an old white guy, myself). However, I think voters should vote for a “person” not for a “demographic.” When I consider the candidates based on what they are trying to accomplish, and the issues to which they are personally committed, I think Bernie Sanders is the person who best exemplifies what the United States needs right now: (1) Less emphasis on solving world problems through military intervention; (2) More willingness to tax those with money, for the purpose of investing in things that will benefit everyone; (3) More willingness to take on the oil companies, and to stop the burning of hydrocarbon fuels, which is killing Planet Earth and putting human civilization in peril.

We need fundamental change, and I think most people agree about that (whatever differences there may be over what exact changes are needed, and how to get there). But if we want change, we need to believe that change is possible. If you don’t believe something is possible, you won’t even try. I am working for Bernie Sanders because if he wins, everyone will understand that IT REALLY IS POSSIBLE TO DO THINGS, THROUGH POLITICS, THAT NO ONE COULD EVER HAVE PREDICTED COULD HAPPEN. If we can show people that surprising things actually can happen in politics, and that things we didn't believe were possible, or "realistic," actually are possible, and are realistic, then that will get many more people involved in politics, which is exactly what we need! Some people call that a Political Revolution.


That's what I call it. That's what we need. And that's why I'm voting for Bernie Sanders. 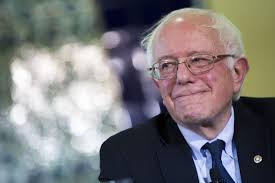 May 23rd is the last date to register for the June 7th Primary.

To be absolutely certain that you can vote in the Democratic Primary you must be registered as a Democrat. You can check your current registration by clicking this link.

Register to vote (or to change your registration) by clicking right here!