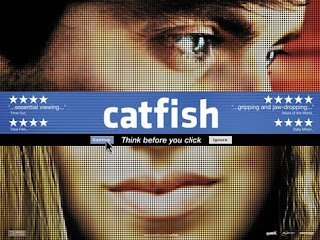 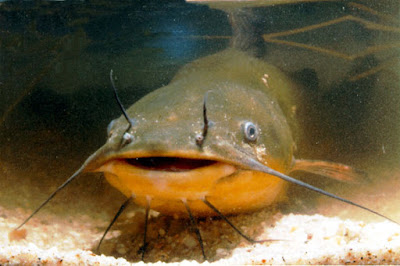 I guess the most common definition of "catfish," nowadays (the one that comes up first in an Internet search), is the definition that relates to the image at the very top of this page. According to the Urban Dictionary, my go-to source on contemporary word usage, a "catfish" is "someone who pretends to be someone they're not, using Facebook or other social media to create false identities, particularly to pursue deceptive online romances."

The second picture is a picture of what I guess can be called the "traditional" catfish, "one of a diverse group of ray-finned fish, named for their prominent barbels, which resemble a cat's whiskers."

Let's return to definition #1. There is a movie out, in which "catfishing" is apparently the main focus of the film. Click for the trailer. There are also helpful online explanations, like "Catfishing 101," that might provide some guidance, if you'd like to start a little catfish experiment of your own. There are also, of course, precautionary websites out there that tell you how to avoid being "catfished."

A Gilroy High School teacher has recently been in the news, accused of catfishing students. That story got me to thinking about politics and catfishing. Politics is one of my major preoccupations, and I suddenly realized that one of the reasons that many people are disgusted with politics is that they believe that politicians are, basically, regularly engaged in "catfishing" the public.

The politicians do this not really to "pursue deceptive online romances," but rather to "romance the voters," and to attract both votes and financial support (not necessarily in that order). Many people believe, in other words, that politicians will pretend to be almost anyone whom they think will be attractive to vulnerable voters, and they are not all that bothered by mobilizing many different persona, all during the same campaign, the better to "reel you in."

Donald Trump manifests all the signs of the classic catfish. Ted Cruz, too, has chameleon and catfish-like qualities. One of the critiques of Hillary Clinton is that she seems willing to change what she says are her political and policy commitments as time goes on, and as public polling reveals where the majority of the voters are.

What about Bernie Sanders? Well, "authenticity" is one of Bernie Sanders' political selling points. Even the President says Bernie is authentic, and one student posits that Bernie's authenticity is, in fact, one of the main reasons students are so energized by his campaign.

That all makes sense to me. Just remember the essence of "catfishing." What looks REALLY good in the way that someone presents him or herself can hook you up with a creature that actually resembles the "traditional" catfish (see image above).

Ewwwww! Online and in politics, I think this is something that everyone wants to avoid! 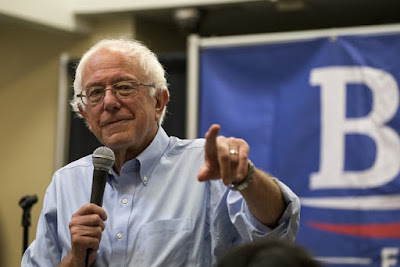