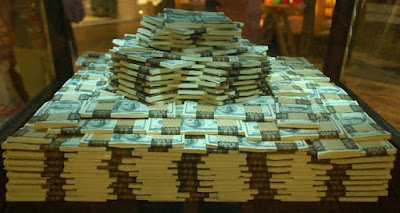 According to Wikipedia, Altucher is "an American hedge fund manager, entrepreneur, bestselling author, and podcaster." Altucher has also "founded or cofounded more than twenty companies, including Reset, Inc. and StockPickr, and says he failed at seventeen of them. He has published eleven books, and he is a frequent contributor to publications including The Financial Times, TheStreet.com, TechCrunch, Seeking Alpha, Thought Catalog, and The Huffington Post."

To continue just a bit more with the Altucher biography, Wikipedia reports that "USA Today named Altucher's book Choose Yourself one of the twelve best business books of all time." The subtitle to Choose Yourself is "Be Happy, Make Millions, Live The Dream."

The picture above, purportedly depicting two million dollars, is the image that Altucher chose to illustrate his recent blog posting, which was titled, "How to Find Two Million Dollars In the Morning."

Considering Altucher's biography, the surprise is that it wasn't Altucher who found the two million. It was Altucher's friend Dave, who apparently made a "forgettable"  investment in a hedge fund in 1998 (not one of Altucher's, it seems), and then, indeed, forgot all about it. When the fund was liquidated, just this year, Dave ended up with the two million. He had just gotten the news of this unexpected capital gain when Altucher stopped by for a visit.

After providing Altucher with his good news, Dave had to run off to the grand opening of a new building in South Street Seaport, owned by "a famous wealthy real estate family in New York." Abandoned by Dave, Altucher then had coffee with another friend, whose real name is apparently not "Ron," though that's what Altucher calls him. "Ron" is writing a novel, and he has to leave pretty soon, too, to get back to work, but Ron doesn't leave before Altucher tells him the story about Dave's good fortune. Hearing this report from Altucher, Ron said, “Man, how do you get into the flow like that. How can I make two million like that?”

I would have thought that Altucher's short answer might have been, "read my book," but Altucher doesn't try to make a new sale, and dispenses this wisdom instead:

Every day we make the choice of who we are. And the choices today turn into your biography tomorrow.

So, if you want to make money, says Altucher, you need to think about that all the time. Ron leaves, back to work, and Altucher wants to play chess, which he does, winding up the day in the manner he describes below:

I walked over to Union Square and played chess with the hustlers there until it was dark and cold and everyone was shivering. But we were all bantering and laughing and dropping the pieces while the day closed it’s curtain and turned into night. If I must say, it was a really great day.

I am not sure that Altucher has any particular instructional ambitions, as he recounts his day, though one lesson from the story might obviously be to get rich early, so then you can "live the dream" and play chess to your heart's delight, if that is your heart's delight.

Besides that, and besides giving Altucher a chance to brag in a humble way about his own comfortable circumstances, I do think that the advice dispensed to Ron is worth thinking about.

Every day we make the choice of who we are. And the choices today turn into your biography tomorrow.

I, personally, was very happy to learn that Ron didn't head off to South Street Seaport, to hook up with the rich and famous family, but went home to write his novel, proving, at least to me, that Ron had actually appreciated the good advice that Altucher gave him.


Every day we make the choice of who we are. And the choices today turn into your biography tomorrow.