#123 / The Warriors And Global Warming 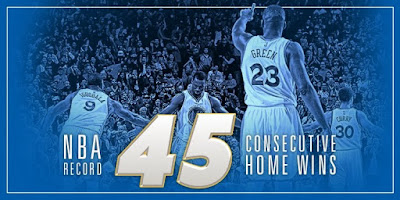 Here's a posting for the sports fans out there.

The Golden State Warriors have been setting a lot of records, and the Warriors seem to be revolutionizing the way that professional basketball is played. That's what some experts and long time fans are saying, at least.

I haven't been a sports fan for years, but I am now trying to arrange my schedule to see every Warriors' game. In the case of the Warriors, as far as I am personally concerned:

For sports fans who may not have paid much attention to public policy for years (my polar opposites, in other words), may I make a suggestion? I suggest you start paying attention to some other records that are falling by the wayside.

According to a recent article in the San Francisco Chronicle:


That's the headline! There are a lot of facts to go along with the headline, and they are all quite compelling. Something revolutionary seems to be happening in this arena, too.

If people knew what was happening, they might get really excited. We could end up with this kind of equation:


That would not be a bad result, and just might be the first step towards saving human civilization and keeping the planet habitable for most living things (including ourselves)!