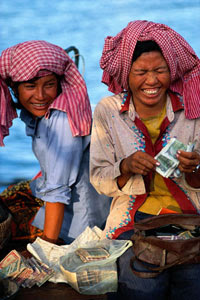 Microlending has always sounded like a pretty good thing to me. Sometimes it is called "Peer to Peer" lending, or microcredit.

According to the Investopedia website, "Microloans are small loans that are issued by individuals rather than banks or credit unions. These loans can be issued by a single individual or aggregated across a number of individuals who each contribute a portion of the total amount.

"Often, microloans are given to people in Third World countries, where traditional financing is not available, to help them start small businesses. Lenders receive interest on their loans and repayment of principal once the loan has matured. Because the credit of these borrowers may be quite low and the risk of default high, microloans command above market interest rates making them enticing for some investors."

The How Stuff Works website explains the concept this way:

The concept behind microlending is a simple one: A $25 dollar loan in the U.S. translates into much more when exchanged for the local currency of a developing nation. On August 10, 2009, 25 U.S. dollars could be exchanged for 73.4 Peruvian soles. You can see how a loan of 1,000 U.S. dollars -- aggregated from a number of individual investors on a microlending Web site -- can really help an entrepreneur start or nurture a small business.

The spirit of capitalism pervades the concept of microlending. With their loans, entrepreneurs can purchase the items they need to support their businesses until they're self-sufficient. Since microlending has taken off around the globe, it's helped make capitalism the standard economic system of an increasingly globalized world.

As you can see from the picture, microlending is often portrayed as if everything were just big smiles and handfuls of much appreciated cash (small amounts of cash, granted; amounts that can, in fact, be held in a hand). Everyone is happy, and "capitalism" flourishes.

Despite this friendly and positive vision of microlending, the  truth may be somewhat different, at least according to a recent posting in the Harper's Magazine blog. The posting, by Thomas Frank, is titled, "Nor A Lender Be." The article is subtitled, "Hillary Clinton, liberal virtue, and the cult of the microloan."

On the topic of microlending, Frank is brutally negative, basing his opinions on the work of Milford Bateman, who is a Croatia-based freelance consultant specializing in sustainable community development strategies in the Western Balkans. Bateman has written a book called, Why Doesn't Microfinance Work? and here is what Bateman says, as channeled by Frank:

Microlending doesn’t work. As strategies for ending poverty go, microlending appears to be among the worst that has ever been tried, just one step up from doing nothing at all to help the poor... Milford Bateman debunks virtually every aspect of the microloan gospel. Microlending doesn’t empower women, Bateman writes — instead, it makes them into debtors. It encourages people to take up small, futile enterprises that have no chance of growing or employing others. Sometimes microborrowers don’t even start businesses at all; they just spend the loan on whatever. Even worse: the expert studies that originally sparked the microlending boom turn out, upon reexamination, to have been badly flawed.

Nearly every country where microlending has been an important development strategy for the past few decades, Bateman writes, is now a disaster zone of indebtedness and economic backwardness. When he tells us that “the increasing dominance of the microfinance model in developing countries is causally associated with their progressive deindustrialization and infantilization,” he is being polite. The terrible implication of the facts he has uncovered is that microlending achieves the opposite of development. Even Soviet-style Communism, with its frequently mocked five-year plans, worked better than this strategy does, as Bateman shows in a tragic look at microloan-saturated Bosnia.

Bateman's views are not universally accepted. Click here for a refutation by the Center For Global Development. I am, however, less interested in trying to referee this dispute about microlending, and am writing to comment on what might seem to be a totally incidental observation in Frank's article. Frank's article is long, and I think well worth reading, but it ranges far beyond microlending itself, and really ends up being a critique of Hillary Clinton and the work of the Clinton Foundation.

As Frank evaluates the Foundation's work, and Hillary's record as Secretary of State, he notes that the Foundation, and Hillary, end up trying to make sure that there is no "ceiling" to human achievement, and particularly for Hillary, no ceiling on what women can achieve.

All to the good (as Frank recognizes), but more pertinent, Frank suggests, is whether or not there is any concern about a "floor."

In a way, thinking about this particular question may be a good way to differentiate between the two candidates for the Democratic Party presidential nomination.