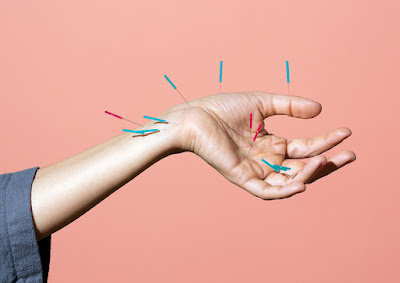 Is acupuncture (as illustrated) "magic?" My son, Philips, is studying acupuncture at Five Branches University, which has facilities in both Santa Cruz and San Jose. I get treated to lots of discussions about the theories that underlie and explain the efficacy of acupuncture and Traditional Chinese Medicine, and since my son acquired the need for real patients, with real problems, I have entrusted my real problems to him, and to the needles that he has inserted into me at multiple locations. There is an understandable and intellectually satisfying explanation for what acupuncture professes to do, and I have noted the positive impact.

Sarah Manguso is an American writer and poet, and she wrote a "Letter of Recommendation" for acupuncture, which appeared in the March 20, 2016 edition of the New York Times Magazine. The illustration above is from Manguso's article, and the impact that acupuncture has had on her has been profound:

I began to understand that there was no such thing as death, if death meant the absolute end of something that once existed and no longer did. Imagine instead a gradual dissipation of the energy once concentrated in the general shape of the living entity. A person. A tree. A fruit on the tree. Pick the fruit and the energy stays in the center of it for some time. I’m already partaking in death along with everything else that ever lived and that lives now.

All of this flooded into my understanding in about 10 seconds. I was tingling. I was more permeable than I once thought. Bones and meat and blood, but now, also, the air. The energy all around. Once the needles were removed, I felt high for days.

Since then, I don’t think I’ve changed much. The vocabulary of the acid-eaters still makes me cringe, particularly when I hear myself using it. This is the burden of the cynic. If your cynicism disappears, even for a moment, you are dismissed by fellow cynics; worse, you court self-disdain.

Which is the real world, the world of doubt and disbelief or the world of unbelievable free-flowing magic? Or is it a steady oscillation between the two?

It has been more than a year, and I still feel better.

Is acupuncture magic? Maybe not. Probably not.

But the World of Nature, the world of biology and energy fields, and of everything that we have not, ourselves, as humans, fabricated and brought into being....

That world seems "magic" indeed. We oscillate between the two worlds in which we reside, the World of Nature and the human world, and whatever is it that we might call "magic" permeates the latter, but it comes from the former.

That's what I think!