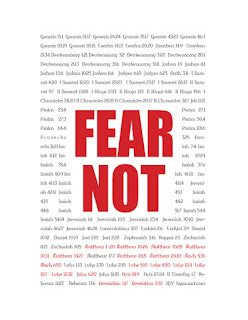 According to the "musings of a minister's wife," the phrase "Fear Not" is used in the Bible about 80+ times. If you click the image to the right, I think you can download a PDF file with each one of these instances listed.

I guess the minister's wife had been told that this phrase appears in the Bible 365 times, once for each day in the year. "How awesome is that!" was her reaction to that news, which in fact turned out not to be true, since when the minister's wife went through the Bible, and counted for herself, she only came up with the 80+.

Of course, we do experience fear as a way to warn us about possible (and very real) dangers. My own personal experience, however, has been that once the danger has been appreciated, fear has basically done its job. Acting out of fear as a means to deal with the danger is generally less productive of success than a more detached, or rational, and less "fearful" approach.

The Wall Street Journal, as is probably not surprising, does not share my perspective. In an editorial that ran in the March 23, 2016 edition, the editors faulted President Obama because the President has been "keeping cool" in the face of terrorism. I guess they think that's a bad idea!

For my part, I'm happy that the President has kept his cool, and is trying to deal with terror attacks not out of "fear," but out of a considered strategy to provide increased safety and security against such terrorist attacks without having to pick a new country in the Mideast to try to blow off the map.

As we all remember, former President George Bush decided, after the terror attacks on the Twin Towers on September 11, 2001, to start a war in Iraq. The President and the entire country was acting out of fear.

The result was not good!

Contemporary political candidates seems to be singing the same tune (see Tim Eagan's wonderful cartoon below). Electing one of the "Fear Brothers" wouldn't be good, either! 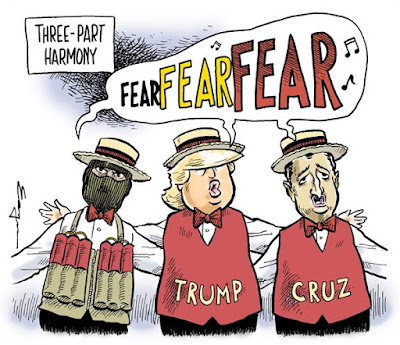