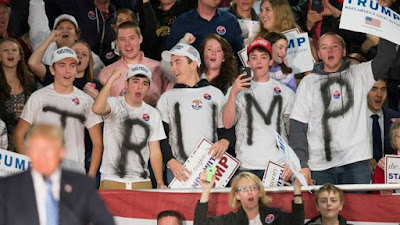 Michael Lissack is the Executive Director of the Institute for the Study of Coherence and Emergence. He is also President of the American Society for Cybernetics. In other words, Lissack is a "tech guy." It appears, however, that Lissack is also a "political guy," and he is predicting that Donald Trump will beat Hillary Clinton in November.

The headline on Lissack's blog posting on April 24, 2016 reads as follows: "What the media will never understand about Trump supporters."

I suspect the media will end up doing a better job of understanding Trump supporters than Lissack now predicts, but since Lissack is currently proclaiming that the media doesn't "get it," we are, of course, expecting Lissack to deliver the insights that he says the media won't, or can't.

Does Lissack deliver some important insight about Trump supporters? I think he does!

Here is what Lissack says about Trump supporters, his observations being presented by contrasting the Trump campaign with the presidential campaign of Hillary Rodham Clinton:

Traditional candidates such as Hillary Rodham Clinton run “I’m with her” campaigns. By “I’m with her” (which actually is HRC’s campaign slogan) the campaign defines the candidate using a set of archetypal stories, policy positions, and public appearances. That definition is presented to the public, and the candidate asks supporters to identify with the position. In effect, the definition of the candidate becomes a sorting mechanism — one either agrees with the prevailing definition or one does not. HRC, at this point in time, has similar negatives in terms of numbers as Donald Trump. But, HRC has nowhere near the fierce loyalty displayed by the Trump supporters. HRC is well defined — you are with her or you are not.

Donald Trump is successfully running a “He’s with me” campaign... The difference between these two campaigns is what will make the 2016 election.

Politicians ... who seek to challenge the powers that be are not stuck running “I’m with her” campaigns. Indeed, HRC faced such a ... candidate in 2008. Barack Obama campaigned not on details but on the possibility of hope and change. Hope and change are and were vague. That vagueness allowed Obama supporters to see in the slogan whatever it was that they were hoping to have accomplished as a goal. Supporters’ hopes and dreams were the promise of candidate Obama. Not specifics. Not a definition. But the individual hopes and dreams of the individual supporters... In 2008, Barack Obama successfully ran a “He’s with me” campaign.

In 2016, it is Donald Trump who is running the “He’s with me” campaign. The vague promises to make America great again … I will make you feel good … I express your anger … I am your vehicle ... are all Donald-isms for “He’s with me,” [and] “He’s with me” will beat “I’m with her” every time.

I do think that Lissack is making an important point, but I would argue that Trump and Hillary are more alike than different. Clinton is asking voters to give her, personally, the power of the Presidency. She promises to use that power to "fight for us." 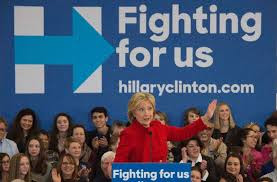 In the Clinton campaign, our job as voters is simply to pick the best candidate (Hillary), and she'll take over and do it all from there. Despite the fact that he promotes generalities rather than specifics, and mis leading voters to conclude that "He's with me," Trump is trying to sell us the same product. He, too, is urging the voters to "let him do it." He may be "vague" about what he is going to do, so that the voters can think that "he's with me," but Both Trump and Clinton are asking voters to elect them, so they, the elected officials, can take care of the problems, and realize our opportunities. Both Hillary and Trump are going to be "fighting for us," if elected. Both of these candidates tell us that they can take care of the challenges. All we have to do is give them a chance by voting them in.

Lissack doesn't mention the OTHER major candidate still appealing to the voters for support. Bernie Sanders is that candidate. Unlike both Trump and Clinton, Sanders is not advertising what HE will do; he is calling on the voters to do it themselves! He has issued a call for a "political revolution," and what he is advertising is ongoing political participation.

So, I would draw the basic distinction differently from Lissack. I see the choice as being either "We," or "She" (or "He," if you like Trump). Is this campaign about picking someone to be in charge, or is the campaign about a collective effort to transform America?

Commentators have noted the incredible enthusiasm that Sanders has generated. I would call that the "Whee" factor.

An appeal to our collective political engagement is incredibly energizing, because it is a call to return to what brought the nation into existence in the first place. Fundamentally, as long as there remains a commitment to democratic self-government, we are going to be less interested in the "I'm with her" or "he's with me" distinction than in the idea that WE are all in this together. 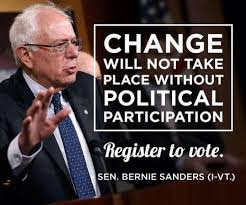